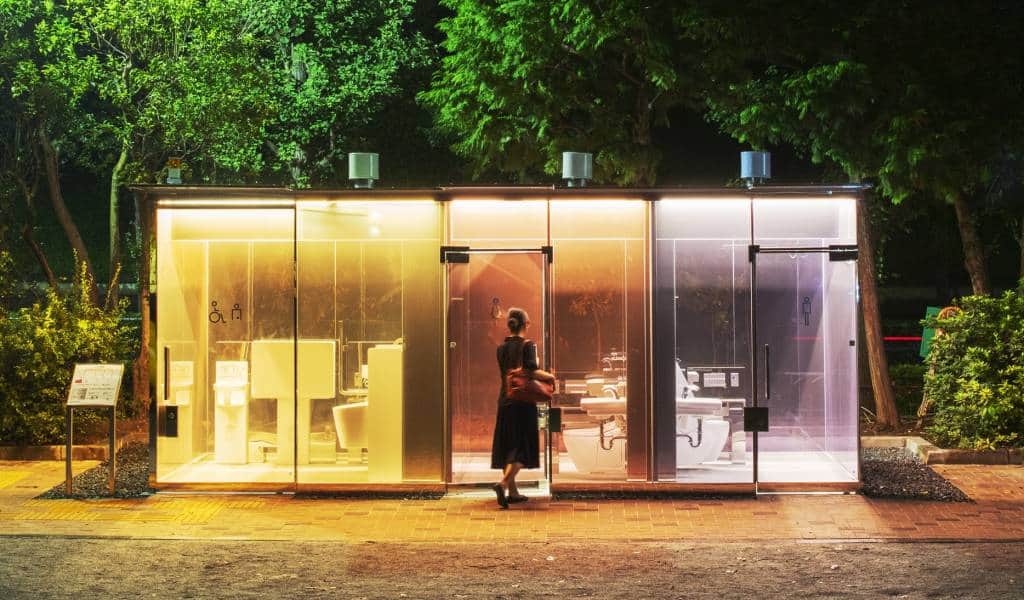 Voice activated, transparent and inspired by nature, Shibuya is taking public toilets to the next level. Leaving no stone unturned in its quest to be the safest, cleanest city of all, Tokyo has decided that after new skyscrapers and the very cool Miyashita Park, park toilets are next. But since this city doesn’t do things by halves, they skipped the standard upgrade and got the country’s top architects, fashion designers and creative directors involved.

There’s many a nation where stepping into a public toilet, and one in a park no less, would be an act of desperation so severe that you would be abandoned then and there, and rightly so (I’m looking at you Britain). So as things go, Tokyo’s toilets are pretty good. There may be an old-fashioned squat toilet here, maybe a spider behind a handle there, but overall they are far less sketchy than visitors may be used to. Standards are high here though, and Shibuya is offering visitors a chance to experience some of the nation’s top architectural creations while they relieve themselves. Don’t believe us? Take a look at Shibuya’s brand new project: The Tokyo Toilet.

The Tokyo Toilet Project: What, where and why not?

The Tokyo Toilet Project combines the efforts of The Nippon Foundation and Toto (of washlet toilet fame) in an effort to bring some class to the parks of Shibuya. While Japan prides itself on its safety and cleanliness, it seems public toilets have not quite lived up to the (arguably too-high) standards. Since 2020, 17 public toilets have been redesigned in partnership with leading Japanese architects, with all but four now ready to use. The aim of the project was to highlight diversity, which may seem a bit of a roundabout way to reflect a pretty serious issue, but there are some elements of it to be found. As well as including medical ostomy points and babycare spaces, some designs have been inspired by issues such as LGBTQ+ awareness and safety: see the toilet of Nao Tamura, but equally notice that she is one of only two female designers involved… We’ll say no more about that.

The toilets in question

The only ones awaiting their grand opening are the public bathrooms at Sasazuka Greenway, Urasando, Nishisando and Hatagaya, which are all due to open in 2022.

Our Favourite Toilets (So Far)

We’re not telling you to go on a toilet tour specifically, but if you’re in the area…

Inspired by the presence of light in nature, Ushiro aimed to create public art with his design. The streamlined structure features a light panel capable of 7.9 billion different light combinations. Reflecting the world’s population, the lights recreate nature, from fireflies to the dappled light filtering through trees. A creative director, Ushiro led the UNIQLO Sustainability Division, with the environment taking a key role in all elements of his work.

Location: Hiroo Higashi East Park, 2-53-5, Hiroo
Close to: The popular expat-dominated area of Hirō with international supermarkets like National Azabu and also only a few minutes away from Hiroo Station.

A fully voice-controlled toilet, the ‘Hi’ toilet was created with contactless life in mind. Fitting during the pandemic but probably a good idea generally, the toilet was designed around three years of research into public bathroom habits. From opening the door, using the bidet functions, flushing and playing music, not a button is needed. Pleasingly, the toilet look as futuristic as you would hope, with a glowing sphere holding two separate toilets. Another creative director, Sato is known for crossing the boundaries of design with media, with international awards for his creative endeavours.

Location: Nanago Dori Park, 2-53-5, Hatagaya
Close to: This is a largely residential area, with Hatagaya station a 2-minute walk away, and the small shopping streets of Sasazuka a little further along.

A triangular strip of a building beside the train lines, Tamura’s red toilet block is striking as well as symbolic. After living in New York, she felt inspired by the way LGBTQ+ communities lived in alignment with their sexual identity. In creating her design, she envisioned a society that embraces the LGBTQ+ community and holds space for them to live their truth. After consideration, Tamura felt that what was needed for this life on a practical level was safety, privacy and urgency, and these three points informed her eyecatching design. The folds are inspired by origata, a Japanese wrapping technique. Often used for gift-giving, the origata-inspired toilet welcomes international visitors and creates a safe space to envelop all users.

As one of only two women in a project created to represent diversity, Tamura is also the most outspoken about the need for acceptance of diversity in her design.

Splitting her time between Toyko and New York, she combines emotional connections with innovation. She has won multiple awards including the IF Design Award, the Gold Industrial Design Excellence Award and the Red Dot Design Award.

Location: Higashi Sanchome, 3-27-1, Higashi, Shibuya
Close to: Ebisu, with its stand-up bars and small restaurants. It’s also pretty close to a handful of other toilets on the list including the Squid, Modern Kawaya, and WHITE toilets.

Located on the corner of Ebisu Station’s west exit, the aim of WHITE was to be inconspicious, bright and fresh. Glowing in its whiteness, the structure uses clean lines and lighting to create a floating space that could easily be mistaken for an art installation. Sato has worked with the Cup Noodles Museum and UNIQLO, designed the symbol for the National Art Center in Tokyo and is a Japan Cultural Envoy, with his own exhibitions held in 2021.

Location: Ebisu Station, West Exit, 1-5-8, Ebisu-Minami
Close to: The Museum of Yebisu Beer is a few minutes away from Ebisu Station, while Ebisu is generally known for small cafes, restaurants and the popular standing bars called tachinomiya. It’s also pretty close to the Squid Toilet in Ebisu East Park and Modern Kawaya in Ebisu Park, both listed below.

A Walk in the Woods, Kengo Kuma

A toilet well suited to its green surroundings, A Walk in the Woods is the creation of wood-loving architect Kengo Kuma. The five huts have Yoshino Cedar surrounds with odd angles and a haphazard feel, offering a playful and natural feel. The wood continues on the inside too, however, with decorative mirror surrounds and mounted pieces of re-used cherry and metasequoia.

Kuma is one of Japan’s leading architects, having designed the Japan National Stadium for the 2020 Olympics as well as galleries, cultural museums and stations in Germany, Denmark, the UK, China and France. Often using wood and natural forms in his work, Kuma has won the Global Award for Sustainable Architecture, the Spirit of Nature Wood Architecture Award and the Arhitectural Institute of Japan Award as well as being recognised in the 2021 Time 100.

Location: Nabeshima Shoto Park, 2-10-7, Shoto
Close to: The Shoto Museum of Art and only a 10-minute walk from Shibuya Station. This area is packed with small restaurants and bars and all the other Shibuya attractions.

Probably the most well-known of the Shibuya toilets, Ban’s transparent cubicles are as anxiety inducing as you’d imagine. Turning from clear to frosted glass through (suspiciously unexplained) technology once locked, the walls are brightly coloured, with orange, red and purple in the Tomigaya Park and greens, turquoise and blue in the Yoyogi Park toilets. Ostensibly to allow visitors to check the cleanliness before entering, the toilet’s transparency also allows for an impressive glow-up in the evening. Both are on the borders of Yoyogi Park and just a minute away from each other, so you can try out both.

Known worldwide for his creative designs, Shigeru Ban has long put his skills to good use. He has developed cost-effective and comfortable emergency housing and dedicated himself to projects in disater-hit areas in Japan and abroad. He is another Pritzker Architecture Prize winner and was also presented with the Mother Theresa Memorial Award for Social Justice, so public toilets aren’t his first foray into community development.

Sitting at the footsteps of Yoyogi-Hachiman Shrine, the Three Mushrooms were inspired by the fungi growing on the nearby forest floor. The muted colours and curved walls allow the three toilets to exist in harmony with the surroundings, with towering trees creating a natural backdrop to the sprouted structures.

Toyo Ito is another of Japan’s leading architects and has won countless awards over the years including the prestigious Pritzker Architecture Prize, The Architecture Institute of Japan Prize, and The Royal Institute of British Architects Royal Gold Medal. His creations include the Tama Art University Library, TOD’s Omotesando Building (which you can see on our walking architecture itinerary) and The National Taichung Theater in Taiwan.

Location: Yoyogi-Hachiman Shrine, 5-1-2 Yoyogi
Close to: Yoyogi Hachiman Shrine, unsurprisingly, as well as the Transparent toilets (above) and the ever-busy Yoyogi Park.

An unexpectedly kitsch design from a leading street fashion designer and DJ, The House was inspired by the idea of learning from the past. The high-rise buildings of Tokyo are all encompassing, and this small traditional house is existing quietly on a street corner, offering a chance for nostalgia to those passing by.

A fashion designer and pioneer of street culture, Nigo is the creator of A Bathing Ape, one of Japan’s top fashion brands. Now designing for Human Made, Louis Vuitton, Adidas and JINS suglasses among others, he is also creative director at KENZO.

Location: Jingumae, 1-3-14 Jingumae
Close to: Takeshita-dori, the cooler Urahara end of Harajuku and all the fashion and foodie spots you could desire.

Inspired by the theme of the surrounding park, the squid toilet is a stylised and surprisingly elegant version of a squid. As well as being a toilet, the pavillion has a courtyard and serves as a shady spot to pause between games. The unusual roof allows fresh air and natural light into the bathrooms, with frosted glass adding to the water theme as well as allowing even more light inside.

Well into his nineties, Fumihiko Maki has taught at Harvard and the University of Tokyo while also running his own architecture firm. He has won countless awards including the prestigeous Pritzker Architecture Prize, the Thomas Jefferson Awards for Public Architecture and the Prince of Wales Prize in Urban Design.

Location: Ebisu East Park, 1-2-16, Ebisu
Close to: The busy area of Ebisu, with its restaurants and stand-up bars. It’s also close to the WHITE Toilet by the west Exit of Ebisu Station, listed above and the Modern Kawaya in Ebisu Park, listed below, and the red toilet, above.

Taking us back to Japan’s ancient history, Katayama took inspiration for his toilet from the Jōmon Period (10,000 to 6,000 BCE). Kawaya were Japan’s original toilets, with ‘kawa’ meaning river and ‘ya’ hut. With this is mind, Katayama and his team designed an “ambiguous space” with 15 concrete walls forming three toilet areas. Warm light guides visitors at night, while the building seemingly vanishes during the day, surrounded by small trees. Located beside a playground, one of the key aims of the design was to have the toilet building seemlessly fit into its surrounds, mimicking a piece of playground equipment or the nearby trees, and impressively it manages both.

An interior designer by day, Katayama is a scenography professor at Musashino Art University, has led on the design of UNIQLO’s flagship stores and received Dutch Design Magazine FRAME’s Lifetime Achievement Award in 2020.

Location: Ebisu Park, 1-19-1, Ebisu
Close to: Our two other Ebisu toilets, one is in Ebisu East Park, and one at Ebisu Station. There are also restaurants and bars, but we all know you’re here for those toilets.