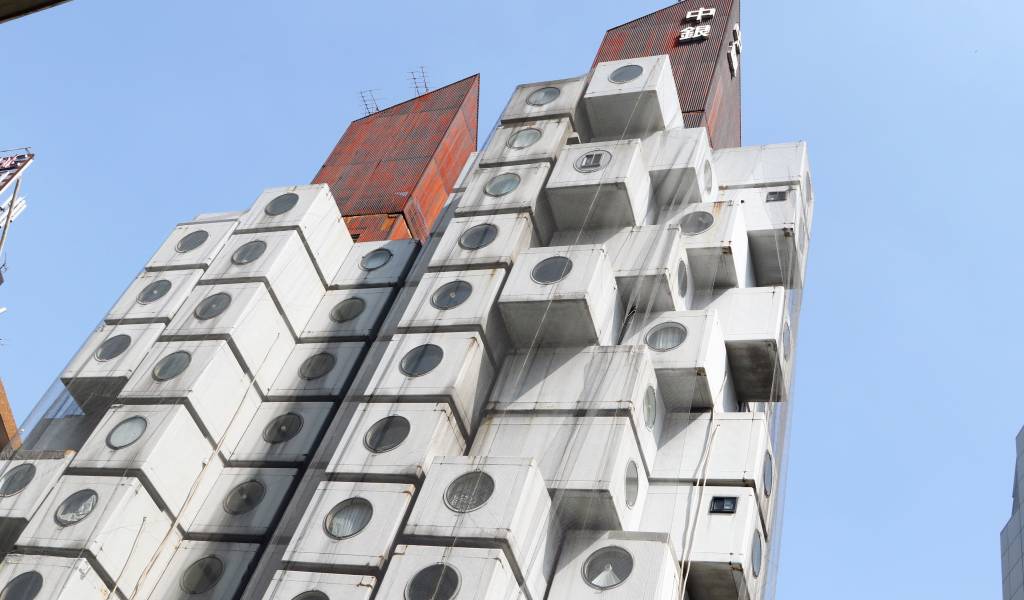 Tokyo Architecture: The 9 Best Buildings in the Capital

Tokyo’s urban landscape is alive with some of the world’s most exciting buildings. From contemporary glass and steel high-rises to revolutionary experiments in design, the city has long invited architectural innovation, the products of which are clear to see today. Below, we walk you through nine particularly stunning examples.

The Nakagin Capsule Tower is a wonderfully bizarre structure, an architectural oddity born out of the post-war Metabolist movement and its most lauded achievement. Guided in equal measure by Marxist theory and natural philosophy, the Japanese Metabolists worked around one core principle: that the built environment should mirror natural organisms; buildings should be able to grow as plants do, to constantly develop according to the needs of their inhabitants.

The tower’s revolutionary form is centered around two pillars, into which square concrete pods can be ‘plugged in’ at will. The pods are prefabricated and identical, each with a single porthole window and cutting edge 70s space-saving technology. The idea was that as times changed, new, updated pods could be attached, or as a family grew, they could take over two or three pods. The building would develop as people did and usher in a new way of living.

No new pods were ever added and today a giant rubble-catching net engulfs the building, with the few remaining residents only noticeable due to their newspaper covered windows. The architect, Kisho Kurosawa, had his Utopian design for life choked by endemic problems small and large, meaning the building is today faced with an uncertain future, looking conspicuously like a sad monument to a future that never arrived.

This modern temple, belonging to Inner Trip Reiyukai (ITR)—an off-shoot of Buddhism, “in the field of mental, physical and spiritual well-being and education” as they claim on their site—is one of the most strikingly imposing temples you’ll find in the city.

Somewhere between an Aztec temple and a supersize woodlouse, it’s a building that defies precedent but doesn’t feel overwrought or silly; it’s perfectly at ease with itself and seamlessly slips into its central Tokyo surroundings, which, for a building of this size, is no easy feat.

Head inside and the crushed velvet decor will make you feel as if you’ve wandered into a David Lynch dream sequence, though the amiable monks will soon put you at ease. Intriguingly, a 400-ton reservoir sits beneath the temple, earmarked for an unspecified future emergency.

Herzog & de Neuron, the architects behind Omotesando’s Prada Building, stated their mission with this project was “to reshape both the concept and function of shopping, pleasure and communication, to encourage the meshing of consumption and culture”. Capitalist-dystopian undertones aside, it’s clear that the intention here wasn’t to build just any store, but a store that would reinvent the very way stores are used.

Has it achieved its goal? Well, simply put, no. On a street of intimidatingly high-end stores, the Prada Building takes the gold, meaning most are put off ever breaching the doors. The building’s facade is nevertheless impressive: a glass tower checked with convex, bubble-like diamonds, which lend the building an almost porous appearance. After dark, the warm interior lights transform it into a giant honeycomb, presumably reserved for only the most affluent of bees.

The Edo-Tokyo Museum is the second (and not the last) Metabolist building to make this list, this time designed by one of the movement’s founding fathers, Kiyonori Kikutake. Just as iconoclastic as the Nakagin Capsule Tower but more menacingly gigantic, the Edo-Tokyo Museum is another vision of the future, derived from a boldly avant-garde architectural playbook.

Yet, Kikutake is clearly also in dialogue with the past with the museum, which is designed to resemble a mutant Edo-era grain silo and built to the exact height of the old Edo Castle. This blend of aggressive futurism and subtle homage is what makes the building so special.

As all diligent cheapos know, the Tokyo Metropolitan Government Office offers Skytree-rivaling views over Tokyo for absolutely nothing. But before scrambling to the top, be sure to consider the building’s architecture.

The Tokyo Metropolitan Government Office is comprised of a series of three buildings, each linked by pedestrian walkways and with the same granite, geometrically patterned facades. Built as a postmodern take on Paris’s Notre Dame, the building gives off a similarly formidable vibe. As the megalopolis’ bureaucratic heart, that was probably the intention.

Not one building but a series, all packed into a small corner of Shinjuku. The Golden Gai is best known as one Tokyo’s premier drinking spots, where tourists and locals alike pile into one of the over 200 tiny bars to experience the drinking culture of a bygone age.

The Golden Gai is a chunk of Showa-era Tokyo that has been saved on numerous occasions from the vultures of redevelopment only by virtue of its unceasing popularity. The low, shack-like buildings are ramshackle and irregular, with the alleys between them narrow and a touch disorientating, all creating an atmosphere that is sharply at odds with the polished city beyond.

The National Museum of Western Art was designed by perhaps the most famous architect on our list, French archmodernist Le Corbusier. It was his first and only building built in East Asia and for that reason has an aura of momentousness about it that is hard to resist.

The building’s exterior has the sleek lines of the International Style mixed with a proto-Brutalist openness about raw materials, making it refreshingly modern, imposing and confident. Within, light floods in through skylights and tactically placed windows and it’s clear the flow of the building has been thoroughly thought through.

Architect Kenzo Tange completed work on the Fuji Television Building in 1997. Although associated with the Metabolists early in his career, Tange nurtured a unique style over his long career, designing some of Japan’s most iconic structures, including the aforementioned Tokyo Metropolitan Building, the Hiroshima Peace Memorial Museum and the Yoyogi National Stadium.

Perched on the Odaiba waterfront, unmatched in size by anything surrounding it, the Fuji Television Building is another of the city’s most striking—an innovative, future-facing structure straight out of the pages of some pulpy sci-fi thriller.

The 25-storey building consists of two main towers, connected by crisscrossing walkways, or ‘streets in the sky’, and the building’s defining feature, a giant titanium sphere, 32 meters in diameter and 1,350 tons in weight. The giant metal ball gives the building a playfulness that makes the building difficult not to be charmed by.

Despite being stripped of its status as Japan’s tallest building by the Tokyo Skytree, Tokyo Tower remains iconic, its red and white latticed form, modeled on the Eiffel Tower, a symbol of the country’s post-war thrust into modernity.

Though thinner and therefore less imposing that the Eiffel Tower, Tokyo Tower, at 332 meters, is taller than its Parisian cousin. It serves as a tourist viewing platform, complete with cafes, restaurants and even an aquarium, and also as a satellite mast for television and radio broadcasting. The tower’s bold colors can be seen from miles around through gaps in the cityscape, though one of the best vantage points is from Zojoji Temple, not far from its base.

Azabudai Ginza Omotesando Ryogoku Shibakoen Shinjuku Ueno
Written by: Jack Heslehurst
Filed under: Things to do
Tags:
Sharing
Questions or comments about this article?
Start a thread on our community forum
Ask our local experts about Tokyo