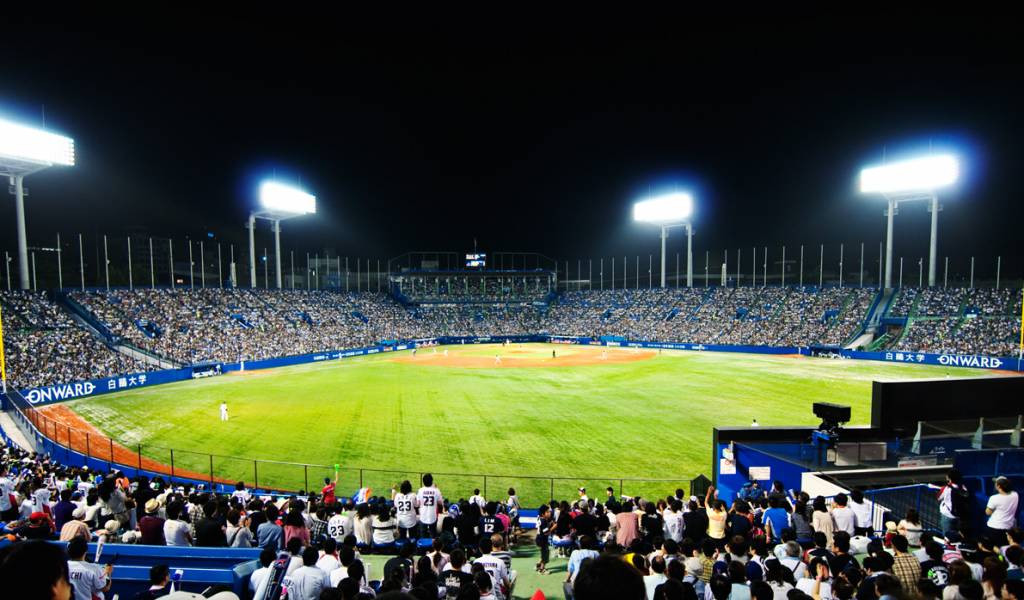 Meiji Jingu Stadium holds a special place in the hearts of Tokyoites. Constructed in 1926, the 37,000-capacity arena is home to the Tokyo Yakult Swallows—the more humble counterpart to the flashy Tokyo Giants in their big shiny dome across town.

Despite the rise of soccer, the historical claim of sumo, and the obsession with figure skating, baseball is still Japan’s national sport.

Side note: If you’re wondering how Japanese baseball compares to Major League Baseball, then you can keep on wondering. I’m from New Zealand, where we spend our summer months playing a quaint game called cricket—so the closest I’ve come to an authentic baseball experience is watching the Seattle Mariners on Japanese TV.

What’s so good about watching baseball at Jingu Stadium?

You get three hours of topflight professional sport and entertainment in a historical stadium smack-bang in the middle of Tokyo, with food, beer and clean toilets—and it costs less than a movie ticket.

If you are expecting to be entertained by what’s happening on the field, well that’s only half the equation. Japanese baseball fans are unique—not even J-League football fans compare. The orchestration, organization and precision of team chants is almost spooky. If you’re positioned opposite the home fans, you’ll also be able to observe their unusual ritual of waving umbrellas when a batter gets a hit.

How much does it cost?

The cheapest outfield (外野 gaiya) non-reserved seats are ¥1,400 for adults and ¥500 for elementary school children. Even for the most expensive “special reserved seats” (指定席 shiteiseki) behind the home plate, the price is only ¥5,900. If it matters to you, you should be aware that if you are sitting in the left outfield seats, you will be among the visiting supporters. The right side of the stadium seems to be where the Swallows supporters congregate.

Food too, is the most reasonably priced I’ve seen at a sports venue—and compared to the soggy chips and meat pies on offer in my native New Zealand, the food choices are incredible—yakitori, takoyaki, sausages, and waffles with ice cream. A skewer of yakitori is only ¥120, and a serving of takoyaki will set you back ¥550. Beer starts from ¥500 for a can.

Bonus tip: If you see a game in summer 2019, you can expect fireworks at the end of the fifth inning, from July 26th to August 25th.

Getting tickets to Tokyo baseball at Jingu Stadium

If you want to be sure of getting your baseball tickets in advance, you can purchase them at pretty much any convenience store you choose. But if you don’t read Japanese, using the ticket vending machines may be difficult to impossible without some help.

Cheap tickets can also be found on re-sale sites like Yahoo! Auction (again, Japanese only), but with such low prices, your best (and most hassle-free) bet might be to just go to the box office at the stadium on the day. The ticket box is located next to Gate 9.

I went on a Friday night—the first game of the regular season—for a game between the Swallows and the Yokohama Baystars. It was quite full, but there were plenty of empty seats left.

Pro tip: During the afternoon before your game, go explore nearby Meiji Jingu Shrine.

While we do our best to ensure accuracy, details may vary. This post was originally published in April, 2014. Last updated in July, 2019, by Mareike Dornhege.

Open with Maps
Written by: Greg Lane
Greg's Tokyo favorites are: Shinshu Osake Mura, Kiyosumi Teien Garden, The American Craft Beer Experience 2022
Filed under: Things to do
Tags:
Sharing
Questions or comments about this article?
Start a thread on our community forum
Ask our local experts about Tokyo