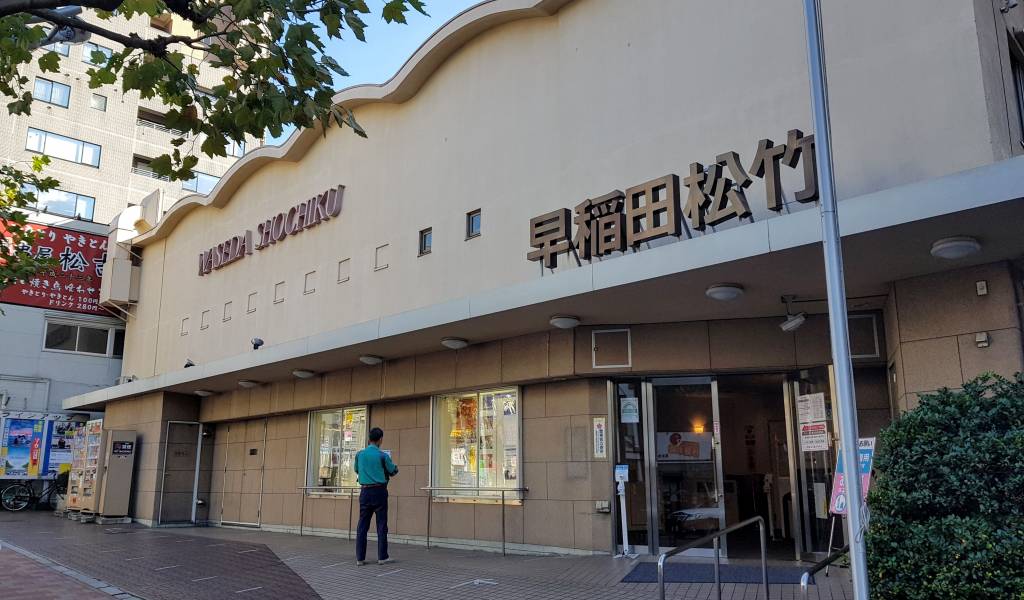 If you can feel your brain slowly melting from an excess of superhero reboots and vanilla romcoms, fear not, Tokyo’s glut of independent cinemas will soon have it back in full working order. These places specialize in arthouse, experimental and foreign films, allowing the city’s arrayed cinephiles to indulge their interest with ease. Relative ease, anyway. English-speaking or English-subtitled films cannot always be guaranteed, though with a bit of hunting there’s always something on offer for those with limited Japanese. Best of all, catching an independent flick is generally a whole lot cheaper than a trip to a faceless multiplex. Sorry, Spiderman 7, you’re going to have to wait.

Waseda Shochiku is a veteran of the Tokyo cinema scene; a cinema that has survived the tumult of regeneration and changing viewing habits unscathed—but only just. The cinema did briefly close down due to financial difficulties but was resurrected by Waseda University students who simply wouldn’t stand for it. Clearly, Waseda Shochiku inspires loyalty. And it’s easy to see why. The cinema is charming, with just the one screen and original art-deco fixtures and furnishings. The cinema isn’t completely backwards looking, however. Though there is a decent amount of classic reruns, the cinema largely shows contemporary arthouse titles from both Japan and abroad. The films are always interesting, regularly rotated and some are even shown with English subtitles. The best thing about Waseda Shochiku is their regular double-bill showings, where you can watch two films for the price of one. If you don’t fancy back-to-back films, you can even leave and come back later for your second.

Ikebukuro, surprisingly, is home to a high percentage of Tokyo’s very best independent cinemas; a fact that flies in the face of the area’s somewhat sordid reputation. The undisputed king of them all is Shin-Bungeiza, a small but longstanding cinema not far from the station’s east exit. On the reels you’ll find an impressively diverse lineup of Japanese and Western films, from esoteric arthouse flicks and Hollywood classics to Yakuza B-movies and the latest anime. Shin-Bungeiza is especially popular for its Wednesday and Saturday all-night screenings—particularly among the city’s nocturnal cinephiles. For just 3,000 yen, catch three to five films, typically from a single director or grouped around a certain theme. For those with conventional sleeping habits, however, general admission is a very reasonable 1,300 yen. Japanese movies are not typically subtitled in English, so unless your Japanese is up to scratch you may have to stick to the Western films.

At once a cinema, gallery, cafe and shop, Uplink is an ambitious undertaking with plenty to keep curious visitors occupied. The cinema is composed of two screens; one fairly large and used for the bulk of showings, the other much smaller (room for perhaps 40 people) and decked out with an assortment of mismatched chairs. Get there early to avoid a stiff wooden dining chair and snag a plush leather number. The films on offer are fantastic, ranging from works of directorial luminaries to unknown local talent. Downstairs, the cafe serves up food as brilliantly incongruous as the chairs, and upstairs, the free gallery is always worth checking out for regularly rotating free exhibitions from local artists and designers. There’s also a small shop to browse, selling an assortment of film-related goods, including swanky coffee table books and clothes.

Hidden away on the upper stories of Shinjuku’s Bunka Building, Cinemart Shinjuku makes for a nice escape from the chaos of the streets below. There are two screens—one large, one small—where audiences are treated to an always intriguing roster of films. Although there aren’t quite as many English-language titles shown here as elsewhere, there are still a few, plus a good selection of European arthouse films and classics of the silver screen. Cinemart is particularly notable for its excellent lineup of independent Asian cinema, including the work of Japanese filmmakers and Bollywood titles. A regular priced ticket costs 1,800 yen, but visit on a Monday or Wednesday and men and women (respectively) get in for just 1,100 yen.

Head away from Shibuya towards Aoyama to find Theatre Image Forum, another string to Shibuya’s arthouse cinema bow. There’s always a stellar lineup of films on offer here, mostly of an arthouse, independent and foreign bent. To give you an idea of what to expect, on offer at the moment (March 2017) is Homo Sapiens, an experimental documentary envisioning a post-human world, and Yasmin Ahmed’s Talentime, a highly original film grounded in the universal themes of friendship, love and family. Foreign, non-English-speaking films are subtitled in Japanese, but there’s always something for English-speakers to check out as well, so don’t worry too much. Prices are pretty standard for Tokyo, with general admission set at a not unreasonable 1,800 yen.

Independent theaters in Tokyo
Ikebukuro Shibuya Shinjuku Takadanobaba
Written by: Jack Heslehurst
Filed under: Movies, Shows and Theatre
Tags:
Sharing
Questions or comments about this article?
Start a thread on our community forum
Ask our local experts about Tokyo