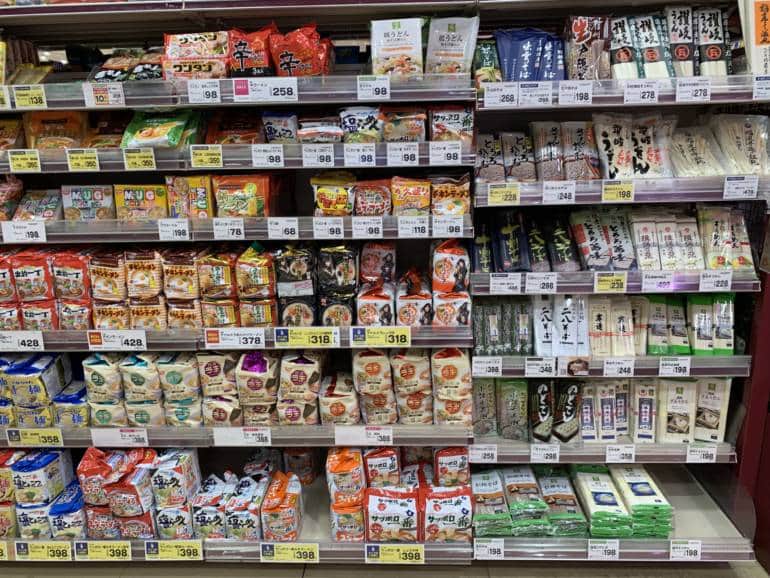 Japan's Most Affordable and Healthy Foods

Healthy eating isn’t exactly known for being healthy for the bank account. Especially not in Tokyo, where it’s often cheaper to eat out at restaurants than to buy groceries. However, Japanese cuisine does have options to stay healthy while keeping the shopping trips affordable.

How can I have an interesting diet with variety while working towards my fitness goals?

One of the most important concepts when it comes to eating healthy is that of satiety. Some foods make you feel fuller than others. This means that with certain food choices you can eat more for less. When you’re eating something like cabbage, 500 calories is going to measure out to being a lot more substance than 500 calories of cake would be. The cabbage will have a lot more healthy nutrients per bite as well. Taking advantage of foods that are high in satiety and nutrients can be useful for any health or fitness goal, from gaining muscle to losing weight and everything in between. While finding unique food options to suit your fitness goals can be difficult and pricey, Japan has some unique flavors that can really increase variety and remain affordable.

Konjac, for example, is a popular Japanese super food. Konjac is a root vegetable common to Japan which can often be found in grocery stores in the form of a firm jelly. The thing about konjac is that, despite being dense and fairly filling, it has almost no calories. While konjac is low in calories it is not low in fiber and healthy minerals. The fiber can help lower cholesterol and blood sugar levels while the minerals like potassium, calcium and iron are important for feeling your best. In Japanese cuisine it’s usually found floating in soups like oden or mixed in with salads. However, it really takes on the flavor of whatever you put it with, so it can be a good match to any dish. And while most “super-foods” have a high price-tag, konjac is generally under ¥100 for a whole package.

If you would rather have something more closely resembling a vegetable in your meals, mung bean sprouts—known as moyashi in Japanese—can also work as a great addition to any dish. Even if the name moyashi doesn’t mean much to you, you’ve probably encountered them before. They’re the little white bean sprouts often found with noodles around Asia, and they are common in a lot of Japanese meals. With a price tag of around ¥30 per 100 grams, these little white sprouts are great value. Moyashi don’t just have a low price-tag though, as they come with a similar calorie count to their value in yen. Along with being rich in fiber, iron, calcium, and potassium, they can help you fill up more at a low price. While noodles are their traditional partner, they can fit well into any sort of stir-fry or salad.

For those of you who like a little snacking in your day, and you know who you are, there is a good option readily available in Japan. Nori, or dried laver seaweed, while usually found wrapped around rice, on its own is quite healthy. It is full of vitamins and minerals like calcium and vitamin A and is only around 5 calories for a sheet. While it might not look incredibly filling, just the act of eating and chewing something with flavor can do wonders for making your body feel fuller, which will make you less likely to overeat.

Seaweed is especially good for this, look no further than the professional bodybuilding world where some athletes have been known to keep nori around to snack on in their lean seasons. You can usually find a variety of these green sheets anywhere groceries are sold online or in person, and while they do range in price, they are usually quite affordable.

How do I get enough protein?

One obstacle many people face when transitioning to a Japanese style diet compared to that of western countries is the high amount of carbohydrates. Japanese food traditionally is based around rice and vegetables with protein being an afterthought added in small quantities. Unfortunately, carbohydrates in general tend to be lower in satiety, and with average meals focusing on rice as the main attraction, the level of protein is not great for feeding lean muscles. Even if you want to try and increase your protein in Japan, meats tend to come with a much higher price than other foods. Fear not though, as Japan has budget friendly protein options as well.

Nattō, famous for scaring away foreign visitors to Japan for years, is a great and affordable option for protein. If you can get past the sticky texture and the smell of these fermented beans, it is a nutritious and filling side dish to most Japanese meals. Nattō is usually a whopping 10 grams of protein for only 100 calories, which are numbers not many foods can boast. It has tons of iron and magnesium as well! At just under ¥100 for a 3-pack, natto is one of the best protein options available in Japan—if you can embrace Japanese culture enough to get past the first bite that is.

And it wouldn’t be an article about healthy Japanese food without a mention of tofu. While tofu doesn’t have as much protein per calorie as natto, it is a little easier to match with a variety of dishes. That, and it’s not as scary to try. While tofu is often seen as vegetarian in other countries, Japan treats it as an additive to many meals whether or not they have meat. It has a low calorie count and can be eaten in anything from soups to salads or just by itself. It is full of vitamins and minerals as well as being very affordable at the local supermarket.

Next time you’re at your local grocery store thinking about what to eat, consider picking up some of these affordable low-calorie foods. Not only will they make you feel fuller for less, but they’ll add a traditional Japanese feel to any dish. And the extra nutrients won’t hurt either!

Written by: Sean King
Filed under: Lifestyle
Tags:
Sharing
Questions or comments about this article?
Start a thread on our community forum
Ask our local experts about Tokyo