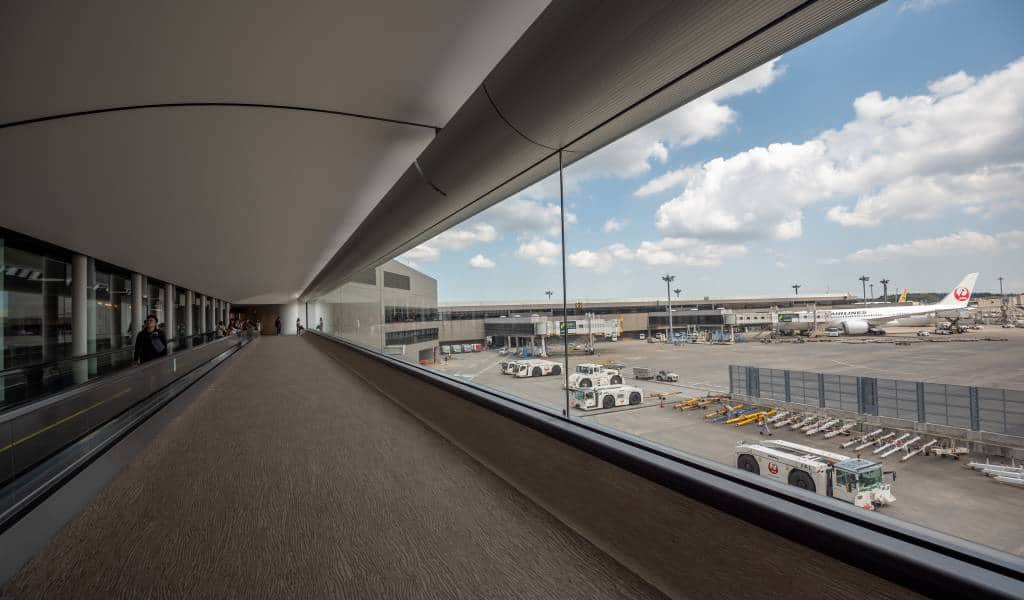 Narita Airport (NRT) is one of two major international airports serving Tokyo, Japan (Haneda being the second). Narita is approximately 80km from the center of Tokyo—it’s actually in the next prefecture over, Chiba.

Because of the distance, many travelers opt to stay at a hotel near Narita Airport the night before their flight out, or after they arrive.

Narita Airport is split into three terminals, all of which are connected by rail or shuttle bus.

On the international side, you’ll find carriers like Korean Air, Delta and Air France. On the domestic side, there’s ANA, Ibex and Skymark.

Narita Terminal 3 is mainly used for domestic flights, though a few of the regional LCCs, like Jetstar Japan and Jeju Air, are housed here too.

See the official Narita Airport website for more information about the terminals.

We’ve put together a guide to the cheapest, fastest and easiest ways (not always the same) of getting between Narita and Tokyo. One-way trips cost as little as ¥1,000, if you’re a savvy Cheapo. That’s on an airport shuttle bus, but other transport options include limousine buses, taxis, shared car transfers, airport express trains and more.

See the NRT transport guide. In it, you’ll find links to pop-out mini guides, like Narita to Shibuya, if you already know your exact destination.

If you are looking for a capsule hotel near Narita, Nine Hours Narita Airport, which is in Terminal 2, is a popular option.

Shopping and dining at Narita Airport

There are plenty of restaurants at Narita Airport, serving up everything from sushi to ramen and soba sets. You’ll also find coffee shops like Starbucks, so you’re well covered.

On the shopping side of things, Narita can actually be a surprisingly good place to do souvenir shopping—particularly once you’re through security. There are mixed-bag gift/chemist/stationery stores where you can pick up all those interesting Japanese Kit Kats, like wasabi or rum and raisin flavor.

Of course, there’s the usual airport lineup of duty-free booze and designer shops, too.

If you have a layover at Narita and you’re looking for something to do or a way to pass the time, check our article “Making the most of a Narita Layover, the Cheapo Way“.

All Map Locations
Open with Maps

All Articles about Tokyo Narita Aiport

Things To Do in Tokyo Narita Aiport

Getting Around in Tokyo Narita Aiport