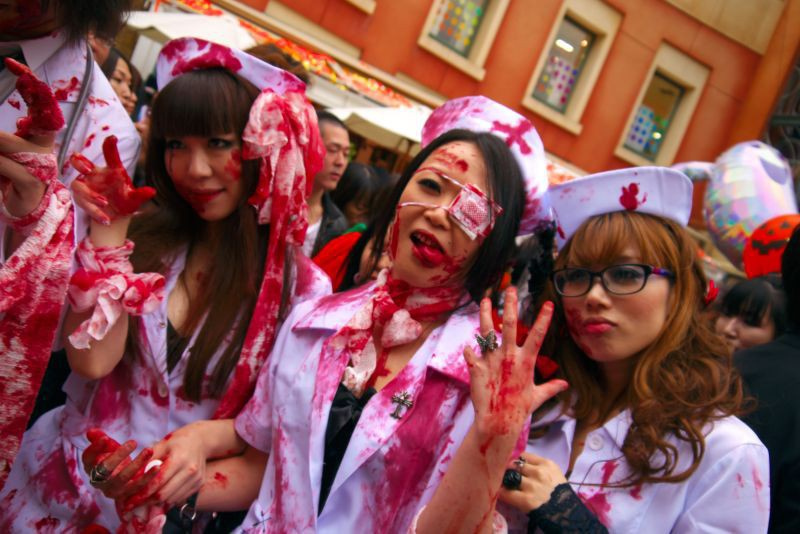 As summer gives way to fall, expect the weather to start getting slightly cooler in September. That also means that the festive summer spirit will also come to a halt (it’s back to school for kids, anyway!). That doesn’t mean that September and October have fewer events to look forward to though. Fall in Tokyo is far from boring — here are some events you might want to attend!

Where: Around the West Exit of Ikebukuro Station

This two-part festival is West Ikebukuro’s pride and joy, the first half featuring a procession of mikoshi (portable shrines). Foreigners are also welcome to carry the mikoshi, although this usually involves applying in advance. The second half in October is a very lively affair, as it involves a yosakoi contest, yosakoi being an energetic traditional dance that involves the use of clappers. You, too, will probably feel like dancing as you watch several teams try to outdo each other by coming up with their own moves and dressing in colorful and/or flashy outfits. On Sunday, the last day of the yosakoi contest, stay tuned for the final dance after the awarding of winners, as the contestants lead a performance that everyone can join in! For both the first and second half, activities take place on the street right in front of Ikebukuro Station’s West Exit, as well as in the West Gate Park.

If Comiket is the mecca for fans of doujinshi (fan-made comics) and cosplay, then Tokyo Game Show is the event that brings gamers together, having an attendance record of over 251,000 visitors last year. Visit this event to be the first to hear important announcements from large gaming companies, test-play new games, get freebies, and buy exclusive merchandise. The cosplayers are also an impressive sight as well. Not only will you get to see what the large companies have to offer, but you can also check out what small and/or indie companies, as well as international ones, are up to.

Japan’s largest event for IT, robotics, and electronics (from industrial to consumer electronics), CEATEC stands for “Combined Exhibition of Advanced Technologies.” This year’s theme is called “NEXT “—Today’s Dreams, Future Realities,” so whether you’re attending as an industry executive or an ordinary visitor, this convention is sure to impress anyone with an eye for innovation. Like Tokyo Game Show, it’s a hands-on experience, as many booths allow (and even encourage) guests to try their latest technologies.

Where: vicinity of Kawasaki Station

Having the distinction of being the most popular Halloween parade near Tokyo (although we’re not sure if the street Halloween parties of Shibuya and Roppongi might give it a run for its money someday!), the Kawasaki Halloween parade has consistently drawn a large number of visitors and parade performers (you have to submit an application to join the parade). This year, Kawasaki is extending its Halloween festivities, although the schedule and list of activities is still to be announced. In any case, aside from the main parade, there will be a kids’ parade on the 24th. So if you want to see a daytime Halloween street party instead of some nighttime revelry, head on over to Kawasaki to celebrate Halloween!

Although many details about this event have yet to be released, this is the event for cinephiles. In previous years, the film festival had, aside from screenings of both Japanese and international films, other activities such as talks, workshops, and exhibits. TIFF’s opening and closing film—the Hollywood film The Walk and the Japanese film Terminal, respectively—have already been announced, so just wait for further announcements! Also, take note that if last year’s event is any indication, the screenings do not only take place in Roppongi Hills, but also in some other designated theaters in the Nihonbashi area.

If you want to experience a part of traditional Japanese culture, the Tokyo Metropolitan Government and Arts Council Tokyo are organizing a large-scale tea ceremony (or more like a series of tea ceremonies), during which you can learn about the way of tea from different tea ceremony schools. Aside from open-air tea ceremonies, there will also be indoor ones (submitting an application in advance is required, though; you can check the details here), and even a tea ceremony for children in the Edo-Tokyo Open Air Architectural Museum. Hamarikyu Gardens also has other cultural events, such as a kimono fashion show, to accompany its tea ceremonies. These are perhaps your best bet for educational autumn events in Tokyo.

Open with Maps
Chiba City Kawasaki Koganei Roppongi
Written by: Tiffany
Filed under: Events | Things to do
Tags:
Sharing
Questions or comments about this article?
Start a thread on our community forum
Ask our local experts about Tokyo