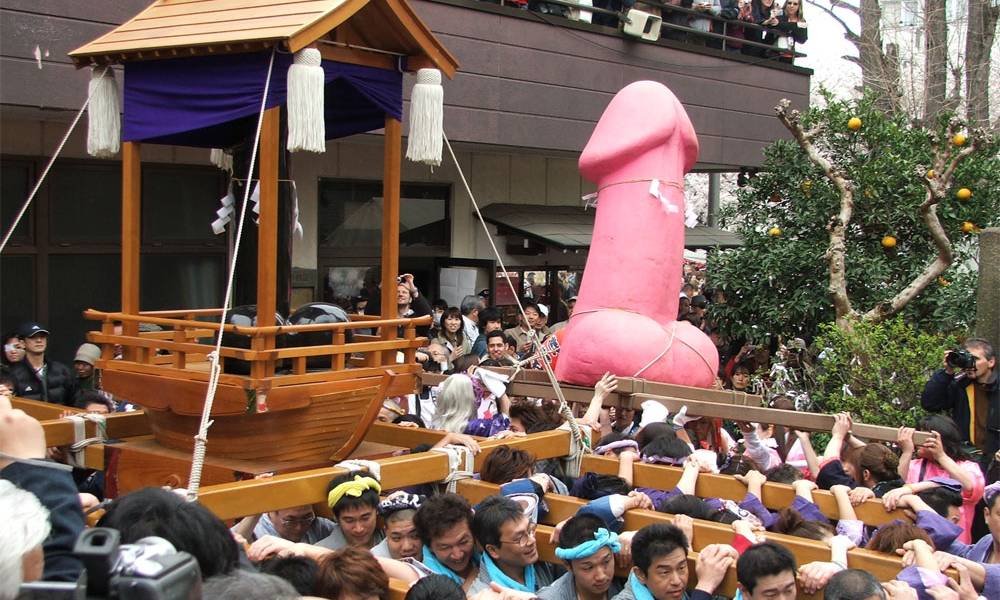 With winter giving way to spring, it’s time to welcome the new season with another roundup of events worth attending. This article doesn’t cover cherry blossom viewing, as it’s such serious business that there are several other articles to cover this beloved springtime activity. (And speaking of blossoms, you can still catch some plum blossoms until around mid-March.)

Although both events have different organizers, both appeal to anime fans, so we grouped them under a single category.

At Haneda International Anime Music Festival, a collaboration between Japanese companies and overseas pop culture conventions, fans can watch overseas guests perform anisong (anime song) covers. Cosplayers are welcome at the event too; there’s a dressing room for changing into and out of costume. There will also be booths, although the details have yet to be released as of this writing. The event itself is free, save for the fee for cosplayers and a concert by the band Loverin Tamburin.

Anime Japan is the anime convention to attend! With official merchandise booths, stage shows, freebies, cosplay, and even pre-events and after-parties, we can’t help but quote their official tagline: “Here is everything about anime.” Whether you want merchandise of your favorite anime, or you want to learn about upcoming series, if you’re an anime fan, this is the event for you. 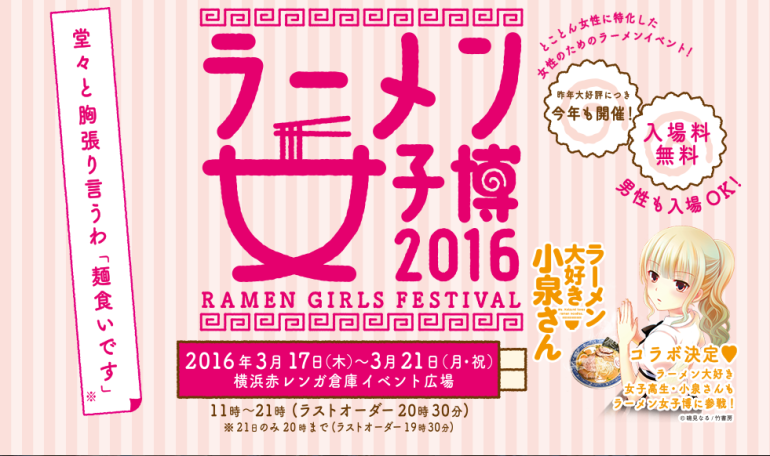 With 15 booths, all with their own take on ramen (and all bowls costing a reasonable price of 900 yen), this event might be perfect for your next girls’ day out. But despite the name and marketing, don’t worry; this isn’t a women-only event. So what’s the difference? The portions at this ramen festival are smaller, to cater to women with smaller appetites. Another thing is that gender differences in Japan can still be quite pronounced—apparently, it can still be surprising to some that women can also enjoy a hearty bowl of ramen, so this event wants to prove that female ramen lovers exist, too!

Better known as that wacky penis festival, the Kanamara Matsuri is, interestingly enough, more popular among foreigners than locals. Contrary to how international media portrays the festival, it’s not an event that has mainstream appeal, and is more like a fringe event that’s quirky enough to attract media attention. Nevertheless, it’s a fun event (with a legendary backstory about a blacksmith who built a steel phallus to kill a demon living in a woman’s naughty bits, to boot!) that sees three phalluses on mikoshi (portable shrines) being paraded around the neighborhood. Be sure to check out the side attractions as well: genitalia-shaped candy, wooden shafts that anyone is welcome to ride, and more. This festival has gotten increasingly crowded over the years, so be early (especially if you want some lewd candy—last year, the lines for the candy were insanely long!).

Celebrating late-blooming cherry blossoms (which are known as yaezakura, one type of which is called ichiyo) and the glory days of the Yoshiwara pleasure quarter, this festival is quite the colorful and elegant spectacle. (Check out fellow cheapo Grigoris’s write-up on last year’s event here!) A reenactment of parades of oiran (courtesans) during the Edo period, this procession involves local residents dressed up as oiran of varying ranks, attendants, tekomai singers, and so on. There are also a few other activities held beforehand, but the parade is the highlight, because how often do you see oiran these days? Well, such a profession no longer exists, so you’ll only ever get to see women dressed up as them in parades like this one.

Note that the area where the Oiran Dochu takes place can be difficult to find—from this author’s experience last year, not all residents and police are even familiar with it. The area doesn’t really have popular landmarks, either; basically, Senzoku-dori is north of Asakusa’s famous Senso-ji.

If you like unique handicrafts, The Hobby Show is Japan’s biggest handicrafts event. Although the name may make you think that it’s an event for different types of hobbies, this is primarily for handicraft makers to showcase their wares. Hall 3 is the odd one out, though, as it hosts the Hobby Cooking Fair, which is devoted to showcasing delicious and artistic culinary creations. Other than that, the rest of the halls are one big handmade goods marketplace. Hall 4, in particular, is called the minne Handmade Market, as it’s a collaboration with minne, an online marketplace for handicrafts. They aim to showcase their sellers’ products in a large-scale physical gathering at Tokyo Big Sight. With 3,000 booths spread out over three days and an estimated visitor number of at least 140,000, this is guaranteed to be an event with something for everyone.

Ariake Asakusa Haneda Kawasaki
Written by: Tiffany
Filed under: Events | Things to do
Tags:
Sharing
Questions or comments about this article?
Start a thread on our community forum
Ask our local experts about Tokyo