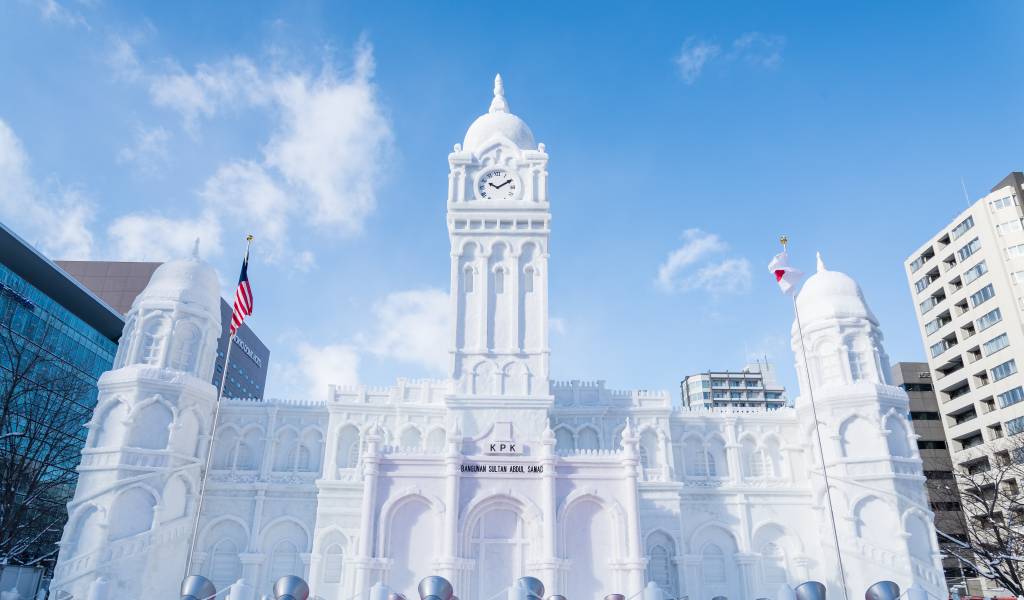 Brrrr. From the top of Japan’s northernmost island, Hokkaidō, right down to Kyūshū, the Japanese winter can be both freezing and beautiful in equal measure. But while some people have hibernation on their minds (yes, I’m talking about you, hiding under your kotatsu), you don’t have to just take refuge in your Tokyo apartment or in a nice warm museum. Here are some fun Japan winter activities to get you out and enjoying the season.

Marvel at the winter illuminations

It’s no surprise that one of the world’s most high-tech countries has some of the best winter illuminations. Best of all, most of them are free — allowing you to see Japan’s cities transformed through projection mapping and millions upon millions of LEDs. Whether you’re a tech nerd or just a hopeless romantic, there’s no denying pretty lights are pretty.

Illuminations have become something of a competitive affair, with each area seemingly trying to outdo the others with bigger and bigger shows each year. Even theme parks are now competing to provide you with the best show. Can’t decide which one to go to? Then check out our top 10 illumination picks for Tokyo.

Enjoy hot eats on the cheap: Oden and nabe

Let’s face it, stuffing your face is an obligatory part of the festive season. But if you’re after some winter grub with a Japanese twist look no further than oden. This stew-like dish features a bucketload of Japanese ingredients simmering in a comforting broth made from soy sauce and fish stock. The smell is a bit of a love-it-or-hate-it affair, but no food sums up the Japanese winter months more. Grab it on the run from a convenience store, or go to a dedicated oden restaurant if you’re feeling fancy.

Still not warm or full enough? Then head to a nabe restaurant for your annual hotpot fix. The best part about these restaurants is that many of them offer all-you-can-eat for a designated time period. Allowing you to stuff yourself full of vegetables, meat and soup for a very reasonably price.

Vegetables in Japanese supermarkets can be expensive, so a nabe session is a good way to fill up on veggies on the cheap. Many nabe restaurants also offer split pots, giving you the opportunity to sample two different broths. We recommend getting a sweet sukiyaki broth in one side of the pot and a spicy kimchi broth in the other.

Featuring enormous snow sculptures of Pokemon, Mario and, er, Donald Trump, among others, the Sapporo Snow Festival is perhaps the most well-known winter festival in Japan. In recent years attracted the attention and participation of sculpture teams from outside Japan lending the event some international flare.

Pro tip: The 2023 festival will be held from February 4 – 11.Bbut if you are thinking of going, get on the ball now. Hotels get booked up quick, and flight prices may rocket closer to the time.

Hokkaidō is a winter wonderland at this time of year, and better yet the cities are designed to cope with the weather. Public transport is reliable and central heating is everywhere. If you’re thinking of heading up north, check out our guide to the fastest and cheapest ways to get to Sapporo. Be sure to eat some Sapporo ramen while you are there.

Japanese snow monkeys aren’t the only ones that can enjoy lazing about in steaming water. Who doesn’t love a nice warm soak? Hang out with locals at a neighborhood bath house (sentō), or if you’re looking for a bit more glamor, stay in a glorious Japanese ryokan. Some of them even come complete with private onsen (hot spring)e. And in good news for the budget conscious, some aren’t as expensive as you might think.

Of course, if you want to see those snow monkeys for yourself, then you’ll have to make the pilgrimage to Jigokudani Snow Monkey Park in Nagano. The word Jigokudani means “Hell Valley” — and once you see the steam billowing off the hot water in this volcanic area you’ll know why. Of course, remember to respect the park and use common sense: don’t bother or feed the monkeys.

If you really want an authentic New Year celebration in Japan, head to a shrine on New Year’s Eve. Once there you can pay your respects and look forward to the year ahead. Be warned though, the more popular shrines will be jam packed. It’s worth remembering that New Year in Japan is very much a family affair — you’ll not see any insane New York- or London-style fireworks here. But if traditional culture is what you’re after then it’s very much the place to be.

If you want to combine your shrine experience with an event you’ll see nowhere else in the world, check out the the Fox Parade at Ōji Inari-jinja in Tokyo. Fox masks and fox paint make it a unique way to see in the new year in Japan.

Hatsuhinode: Hike up a mountain to see the first sunrise of the year

Feeling adventurous? Then why not get up in the middle of the night in freezing temperatures to climb to the top of a mountain to watch the first sunrise of the year? Many people do — during New Year Tokyo’s Mount Takao often has a queue to get to the top.

That said, the feeling you get watching the first sunrise of the new year in Japan is hard to beat (even if you are surrounded by hundreds of raised smartphones everywhere you look).

No, we don’t mean at one of Japan’s many 100-yen shops. Many high-end department stores slash their prices over the new year period, offering prices you will see at no other time of the year.

Many people know exactly want they want — but if you’re feeling lucky, why not go for a fukubukuro (literally meaning lucky bag)? The bags are sealed so you don’t know what’s inside, but the items inside are often worth much more than what you paid for. A good place to try these bags out is an electrics store, as you are sure to have some use for what you receive.

The sales season is not as hectic as in the US — so you can enjoy wandering about and looking at the deals without fear of being stampeded. Do expect queues though!

Hit the slopes: Take a snowboarding and/or ski trip from Tokyo

There is powder aplenty in the Japanese winter, just waiting to be carved. See our guide to snowboarding and skiing trips from Tokyo for where to go for your adrenaline fix.

Ward off demons during Setsubun

No visit to Japan is complete without taking part in at least one traditional festival. Setsubun is a festival held the day before the beginning of spring in Japan. It’s accompanied by a special ritual called mamemaki to cleanse away all the evil of the former year and drive away nasty spirits for the year to come.

Traditionally, a person dresses in a demon mask and other people shout “Oni wa soto! Fuku wa uchi!” (“Demons out! Luck in!”) and throw roasted soybeans at them. Mamemaki dates back about 600 years, and is a unique way to strengthen bonds and unite forces against evil. You can buy little packets of soybeans, or even a demon mask, to keep as souvenirs.

While we do our best to ensure that everything is correct, information is subject to change. Originally published in January, 2018. Last updated in November 2022 by Maria Danuco.

Written by: Justin Egli
Filed under: Sporting Activities
Tags:
Sharing
Questions or comments about this article?
Start a thread on our community forum
Ask our local experts about Tokyo