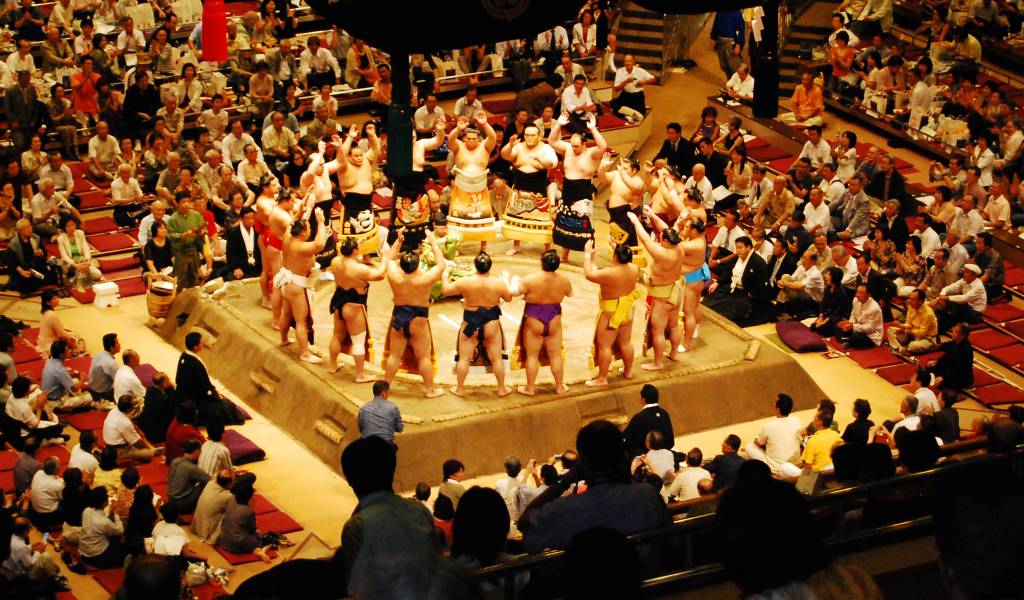 Guide to Seeing Sumo in Tokyo

Note: The January Grand Sumo Tournament will take place in Tokyo in 2021.

Official sumo tournaments are held six times a year, and three of those are held at the Ryoguku Kokugikan (Sumo Hall) in Tokyo in January, May and September. These Grand Sumo Tournaments are spread over 15 days, so there’s a total of 45 days of top-class sumo in Tokyo each year.

The opening days, closing days and the days in between which fall on the weekend are always the busiest. As you’ll know if you’ve been to Tokyo Cheapo before, it’s best to do things off peak. This means to see cheap sumo in Tokyo, your best bet is days 3 to 6 and 10 to 12.

There are many different types of seating available for sumo in Tokyo—and a range of prices. Until recently, the ringside tamari seats weren’t open for the general public to purchase; these were reserved for sumo association sponsors and members. Now, in theory anyway, you can get the chance to have a 180kg sumo wrestler plant his rear-end on your face as he hurtles from the dohyo—but tamari seats are still quite hard to come by.

The rest of the seats are divided into “box seats” and “arena seats”, and are fine for us cheapos.

Box seats, or masu seki, are basically a (small) square of tatami mat into which 4 or 6 people fit—so you have to buy all 4 or 6 seats. Note that these are not spacious—they’d typically fit four small Japanese grannies or one sumo wrestler comfortably. Tatami has more give than wood or concrete, but most people bring their own cushions. The box seats are further divided into A, B and C—moving progressively further from the action.

The arena seats are on the second floor of the gymnasium and are similarly divided according to proximity to the dohyo. Since the box seats sell out fast, you’re most likely to score an arena seat.

Tokyo sumo tickets: How much do they cost?

Masu-seki box seats range in price from a conservative ¥38,000 to ¥47,000 or more for all four seats, while arena seats start from around ¥3,800 and go up from there. Expect to pay somewhere closer to ¥18,000 if you’re buying tickets close to the tournament dates.

Ordinarily, you can get tickets easily online through Viator, as well as Voyagin and other authorized resellers. However, due to the extraordinary circumstances caused by COVID-19, sumo tickets may not be available on partner sites. See the official sumo website for up-to-date information on buying tickets.

A dirt-cheap option is jiyu seki, or “free-seating tickets”, which aren’t available for pre-sale. You can (try to) buy these from the Kokugikan at 8am on each day of the sumo tournament—but be warned that they sell out super fast (you may need to get queuing before dawn) and also are the worst seats in the house. Think far, far away, just underneath the ceiling. If you’re going in a group, these are not a good idea. For die-hard cheapos determined to try scoop the jiyu-seki bargain, our advice is to go on a weekday, on the “off-peak” days mentioned above. Here’s a decent write-up on what to expect if you go this route.

Pro tip: Whatever ticket you end up buying, it will give you all-day access to the tournament venue. Matches may start around 8:30am, but the biggest, best wrestlers are only rolled out in the late afternoon—so you can nip out for a bite to eat in between bouts. And, on that note …

Refreshment options at sumo in Tokyo

Although not completely over the top, you’re a captive audience at the sumo, so food and drinks are sold at a premium. Unlike sports events overseas however, you are permitted to bring whatever you like into the arena. When I went in, I took in a huge 2L cardboard carton of Japanese sake that sells for less than ¥1,000 at the supermarket. I was worried that they would search my bag and confiscate it, but it appears that they don’t search bags (or didn’t, anyway) and they’re not that fazed. Taking your own bento and snacks is also a good idea. Saving money on food can make watching sumo in Tokyo a bit cheaper.

What if I’m broke/not here when there’s a sumo tournament happening?

Never fear—you can still get your sumo fix by watching a morning practice session through a stable window, or (better yet) booking a tour that takes you into the sumo stable itself.

While we do our best to ensure it’s correct, information is subject to change. This post was originally published in December, 2014. Last update: July, 2020.