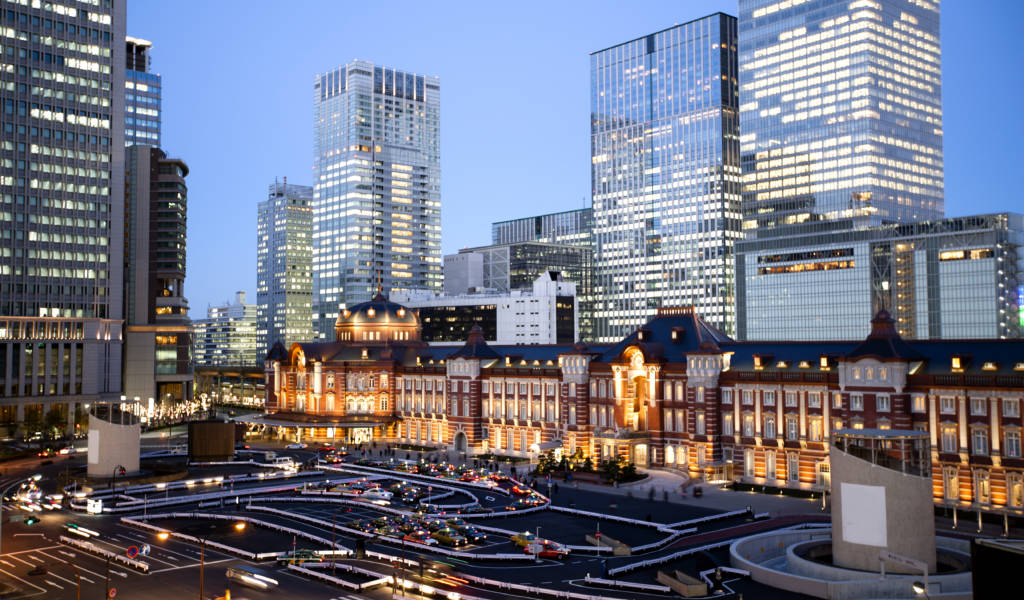 The Survival Guide to Tokyo Station

Tokyo Station is — as you may have guessed — one of the main train stations in Tokyo. But it’s more than just a transport hub. This station is an architectural delight packed full of history and things to do. Also it is much easier to navigate than Shinjuku or Shibuya Stations. Read on to learn more about Tokyo Station and what makes it so special.

Tokyo Station is located in Chiyoda Ward in central Tokyo, just a short walk away from the Imperial Palace. It has a grand total of 28 train platforms servicing eight local train lines, seven Shinkansen lines, and a Metro Line. There are also numerous bus services with stops there.

There are numerous bus stops serving different purposes all around Tokyo Station. Here are some of the main ones you should know about:

Foreign visitors should take note of the JR East Travel Service Center (pictured above). It’s just outside the Marunouchi North Gate Exit, to your right when exiting the ticket gate. The staff here can assist with buying tickets, making seat reservations and provide general tourist information. However, don’t get this place confused with the other JR East Travel Service Center opposite it — that one is targeted at domestic tourists and has different information. The one for foreign visitors is next to Tokyo Station Gallery. It also has a noticable ‘i’ (Information) symbol on the door. In the same area you’ll also find a small office offering Luggage storage/delivery services.

There are other places offering tourist information and luggage storage in the station, however these ones have the best services for foreign visitors.

Admittedly, getting around Tokyo Station can be a little confusing. Not only is it large, it’s also busy and has multiple exits, but with these tips you’ll be breezing through the station like a local.

Catching the Shinkansen at Tokyo Station

Tokyo Station is a great place to catch the Shinkansen. Because it’s the first stop on the Shinkansen, the train will be totally empty before you get on. For this reason we recommend getting on the Shinkansen here, rather than at Ueno or Shinagawa Stations if you don’t have a reserved seat.

However, if you are going to catch the Shinkansen from here, it’s important to know that there are separate ticket gates for north and south bound Shinkansen lines. In both cases, the ticket gates are on the Yaesu side of the station. North-bound routes are accessed via the North Transfer Gates, to get to them you have to enter the local train ticketed area first. On the other hand, south-bound routes can be accessed via the South Transfer Gates, you can access these directly from both outside the regular ticketed area, as well as from within. Confused? Yeah, we were too. Luckily there are plenty of maps and signs around the station to help you figure out where to go. In the meantime, this map can help you get an idea of what to expect.

Things to do in and around Tokyo Station

There’s plenty to see and do in the station area. Of course, we’ve already sussed out all the most interesting things and put them in their own article, which you can read here.

The short version is that Tokyo Station is a great area for souvenir shopping — for both omiyage (traditional souvenir snacks) and pop culture/anime merchandise — as well as exploring galleries, admiring architecture, and gobbling down some excellent ramen. You can also easily wonder down to the Imperial Palace, or even to Yurakuchō or Ginza. It’s very easy to fill an hour or two between train departures — or even a whole day — just in the station area.

Tokyo Station is a good place to be hungry, simply because there are so many options. If you’ve got time to sit down and eat, First Avenue Tokyo Station (outside of the ticket gates on the Yaesu side of the station) is home not only to Tokyo Ramen Street, but also Tokyo Gourmet Zone and Nippon Gourmet Road. These areas mostly specialize in Japanese food or fusion cuisine, so they’re quite popular with tourists.

There are also cafés inside and outside the station gates, including local chains like Beck’s Coffee and Dean & Deluca, as well as Starbucks. You’ll also find a fair few bakeries, and if you’re after take-away options there are plenty of convenience stores and even a McDonald’s.

No long distance Shinkansen ride is complete without an ekiben — a type of bentō (lunch box) sold at train stations. And at Tokyo Station there are plenty of options to choose from. If you don’t mind keeping things simple (and cheap) you can pick up a bentō from just about any convenience store in or around Tokyo Station for around ¥500. But if you want the true ekiben experience, you have to buy it inside the station — and pay the premium, ¥800 to ¥1,500.

There are a number of shops inside the ticket gates selling ekiben, but one of the most well-known ones is Ekiben Matsuri (Ekiben Festival). Ekiben Matsuri is part of the Gransta mall, located along the central passageway. It specializes in selling ekiben from all over the country — yes, there are regional ekiben. Another option is the bentō section in the Ecute mall, which has a number of different bentō shops. Keep in mind that there are actually fewer ekiben shops once you enter the Shinkansen gates, so grab one before you go through.

When it was first conceptualized in 1894, Tokyo Station was meant to connect just two train lines. Construction was delayed due to the First Sino-Japanese War and the Russo-Japanese War, and the station wasn’t finished until 1914. It officially opened on December 20, and at that time had only four platforms. Today, those same platforms are used for the Yamanote, Keihin–Tōhoku and Tōkaidō Lines.

In 1945, parts of the station were destroyed by World War 2 fire-bombing. It was rebuilt within a year, but some changes were made to the original architecture — the new building was only two stories tall instead of the original three, and the domed roofs were replaced by angular ones. Over the following decades, there were numerous renovations and extensions, including adding platforms for the Shinkansen routes. More recently, in 2012 there was restoration work to the Marunouchi side facade, which included returning the roofs to their original domed shape.

Japanese Prime Ministers were attacked at Tokyo Station on two separate occassions. In 1921, Takashi Hara was assassinated while preparing to board a train to Kyoto. Then in 1930, Osachi Hamaguchi was shot — he survived the initial attack but passed away a year later from his injuries. There are plaques in Tokyo Station commemorating both of these incidents, Prime Minister Hara’s is inside the ticket gates near the Marunouchi South Gate Exit, while Prime Minister Hamaguchi’s is almost exactly in the center of the station, halfway between Yaesu and Marunouchi Central Gates.

Is it worth staying near Tokyo Station? If you are looking for accommodation with good transport connections, yes. However, if you’re after something different see our guide on where to stay in Tokyo for other ideas.

Is Tokyo Station busy? Tokyo Station is one of the busiest stations in terms of the number of train departures per day. However, when it comes to daily passenger numbers Shinjuku Station snags that title.

Written by: Maria Danuco
Filed under: Getting around
Tags:
Sharing
Questions or comments about this article?
Start a thread on our community forum
Ask our local experts about Tokyo