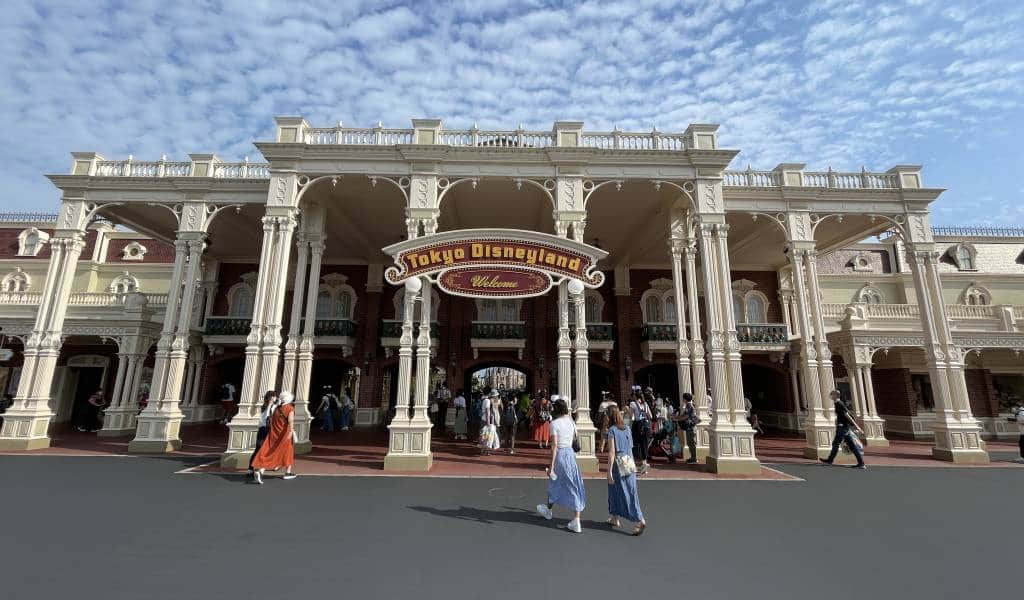 How to get from Haneda Airport to Tokyo Disneyland

As the crow flies, it’s about 13km (8 miles) from Haneda Airport to Tokyo Disney Resort. That doesn’t seem far, but it’s important to know that the route is mostly over water, so it’s not feasible (unless you really like swimming). Instead, you have to loop around through central Tokyo or across Tokyo Gate Bridge to get over to Maihama in Urayasu city where Tokyo Disney Resort is actually located. In this regard you have a few different transport options to choose from including train, bus and taxi so let’s take a closer look.

Note: Unless otherwise stated all times and prices are calculated based on travel from Haneda Airport Terminal 3 (where most international flights arrive) to JR Maihama Station (which is the unofficial ‘gateway’ of sorts into Tokyo Disney Resort).

The best option for getting from Haneda to Disney

In our opinion, a Limousine Bus or shared taxi are your best options. The Limousine Bus is affordable at ¥1,000 while a shared taxi will set you back ¥5,200. Either option will take your exactly where you want to go without having to worry about making confusing transfers with all your luggage in tow. The main difference is that the Limousine Bus has a limited number of departures so if you’re arriving late at night or early in the morning you’re better off going with a shared taxi.

As you can see from the table below, there’s a fair bit of variance in price between all the options but not so much when you consider the amount of time it takes. Another factor you should consider when making your choice is whether you want to deal with multiple transfers — if your answer is no, rule out all the train options now.

Haneda Airport to Tokyo Disney by train: Cheap but not easy

We’ll get straight to the point here, going by train is the cheapest option but it is definitely not the most convenient. There are a few different train routes you could take to get from Haneda to Tokyo Disney, and they all involve multiple transfers. Out of all of the route options, we’ve picked the best 3 based on time, price, and transfers, and outlined them for you below. Keep in mind though, that transiting through Tokyo train stations at rush hour — especially with luggage is — no easy feat.

One thing you can do to make this easier is to pick yourself up an IC card, a transport card that you can charge up and use to easily get on/off trains and buses without having to fiddle around with cash and paper tickets. There are two types you can get in the Tokyo region, Suica and Pasmo. Both have special tourist versions with nicer designs than the normal ones, but you need to get them from special counters at the airport.

There are discount ticket packages available for Keikyū trains from Haneda Airport into central Tokyo, but they aren’t worth it for this journey. The discount tickets will cost you more than any of our suggested routes and won’t cover the whole trip anyway.

Note: It can be very difficult to get around Japanese train stations with lots of luggage in tow. Save yourself some hassle and keep your eye out for the elevators on the platforms, trying to go up the escalators with your suitcase can be a pain — for you and everyone around you.

Route 1: Cheapest of the cheap

This route is the cheapest of the train options, but takes slightly longer. You start by catching the Keikyū Main Line train from Haneda Airport Terminal 3 Station to Shinagawa Station. At Shinagawa Station you’ll need to transfer to get to Tokyo Station. There are three different train lines that will do this, the Yamanote Line, the Keihin Tōhoku Line and the Ueno-Tokyo Line. They are all operated by JR, so the price will be the same, just get whichever one suits your timing — but if you’re not sure go for the Yamanote, it has very frequent departures. Once you’re at Tokyo Station, you’ll make your final transfer to the Keiyō Line and head for Maihama Station.

How much does it cost? ¥610
How long does it take? 37 min on trains, but allow 1 hour including transfers

Route 2: Get there faster

This route will get you to Tokyo Disney faster, but has the same number of transfers and costs slightly more. Catch the Tokyo Monorail from Haneda Airport Terminal 3 Station all the way to Hamamatsuchō Station. There you’ll transfer to either the Yamanote Line or Keihin Tōhoku Line to Tokyo Station. From there it’s the same as Route 1 above, transfer to the Keiyō Line and head for Maihama Station.

How much does it cost? ¥810
How long does it take? 34 min on trains, but allow 50 minutes including transfers

This route gets a bonus mention purely because you make your transfers at smaller stations — meaning they’re a bit easier to navigate and generally less crowded. This route is the fastest of the three, but is also the most expensive. You start on the Tokyo Monorail from Haneda Airport Terminal Station, and transfer at the Tennōzu Isle stop to the Rinkai Line. Take this all the way to Shin-Kiba Station and then transfer to — yep you guessed it — the Keiyō Line, then head for Maihama Station.

How much does it cost? ¥850
How long does it take? 32 min on trains, but allow 50 minutes including transfers

Taking the Limousine Bus from Haneda to Tokyo Disney: Our recommendation

Buses are our recommended transport method for this journey. Specifically, the Limousine Buses because it’s convenient and well priced. A Limousine Bus isn’t as fancy as it’s sounds, but it is comfortable and importantly they have space for your luggage.

The Limousine Bus bound for Tokyo Disney departs four times a day from Haneda Airport Terminal 3 between 1:50pm and 7:30pm. But if you hop on the free inter-terminal shuttle bus to Terminal 1 or 2, you’ll be treated to much more frequent departures, every 10-20 minutes between 8:35am and 1:05pm. After 1:05pm departures become more inconsistent, anywhere from 10-50 minutes between departures until the last departure at 7:50pm. The Limousine Bus stops at Tokyo Disneyland, Tokyo DisneySea and a number of nearby hotels.

How much does it cost? ¥1,000
How long does it take? 30-40 minutes
Where can I buy tickets? Tickets can be bought at the Bus Ticket Counter on the second floor of Terminal 3 or purchased online here. For online bookings, remember that Tokyo Disney is not in the 23 wards of Tokyo, it’s in Chiba Prefecture so you’ll need to select that filter first, then you’ll see the options for Disney Resort.

Getting a taxi from Haneda to Tokyo Disney: Convenient but pricey

Similar to limousine buses, taxis are convenient — they’ll get you exactly where you want to go without having to worry about transfers or dealing with your luggage. Given the higher price tag, we recommend them for groups (so that you can split the cost) or families. You could take a regular taxi for ¥10,273, but this price can fluctuate depending on things like the time of day. Instead we suggest booking a shared or private taxi online in advance, which gives you not only peace of mind knowing everything is organised for you, but is also handy if you’re arrving late at night/early in the morning.

A shared taxi means you’ll be hopping in alongside other freshly arrived travelers — great for extroverts, not so much for introverts. This also means you might not be departing right away, since others may have arrived on different flights you could be waiting up to 2 hours. And your journey might take longer because you’re all destined for diffferent places.

How much does it cost? ¥5,200
How long does it take? 40+ minutes (but likely much more because you’re sharing)
Where can I buy tickets? Book online here

Private taxi services have that added layer of comfort knowing everything is all about you. You won’t have to wait for others to arrive like if you went for a shared taxi, and you’ll leave straight for your destination making for a much faster trip. If you’re a real lone wolf you could have the whole taxi to yourself, but we generally recommend it for larger groups or families. Our recommended private taxi service can fit up to 9 people and their luggage (that’s as low as ¥2,666 each).

Of course there are other ways for you to get to Tokyo Disney — you could walk or try to hitchhike for example — but let’s quickly cover the more realistic ones that might have occured to you.

Generally, we don’t recommend renting a car to get from the airport to central Tokyo. Since Tokyo Disney isn’t in Tokyo, we understand the temptation but it’s not going to be any faster than a regular taxi and then once you’re there you have to pay for parking — ¥2,500 on weekdays and ¥3,000 on weekends.

There are A LOT of hotels in the Maihama/Disney resort area and many of them offer airport transfer services. But when we looked into it, most of those services are the same as the Limousine Bus we covered earlier. As in, if you go to the hotel website and try to book an airport transfer you’ll be redirected to the Airport Limousine Bus website. If you’re staying at a hotel in the area and it’s not on the Airport Limousine Bussite, it’s still worth checking your hotel’s website just in case they have a different service.

So you got your hands on a JR Pass and are just itching to use it? Resist the temptation. While it will cover the entire journey from Haneda to Tokyo Disney by train, that’s only ¥850 or less that you’re saving and you’re wasting a day of validity on your pass. JR Passes are excellent value for money for long journeys, especially ones where you can use the Shinkansen, but they’re not suited for shorter trips like this one.

Other things you should know about going to Tokyo Disney

So you’re all set and know how you’re getting yourself to the happiest place on Earth? Excellent. Just keep in mind that since you’re coming straight from the airport you’ll probably be arriving with you luggage in tow. Disneyland and DisneySea both have coin operated luggage storage, ranging in price from ¥400 to ¥800 depending on the size you need. They are a first-come-first-serve situation and both parks request you use the lockers outside the gates for large items.

Another option is to drop your luggage off at your hotel, if you are staying nearby. For example Hotel Dream Gate is right by Maihama Station and offers free luggage lockers for guests to use on the day of their arrival. For other recommended hotels in the area check out this handy guide.

Also be sure to check out our article on how to save money at Disneyland. It’s got a bunch of great tips, as well as info on how to buy tickets and snag some cheap souvenirs.

Written by: Maria Danuco
Filed under: Getting around | Transport
Tags:
Sharing
Questions or comments about this article?
Start a thread on our community forum
Ask our local experts about Tokyo