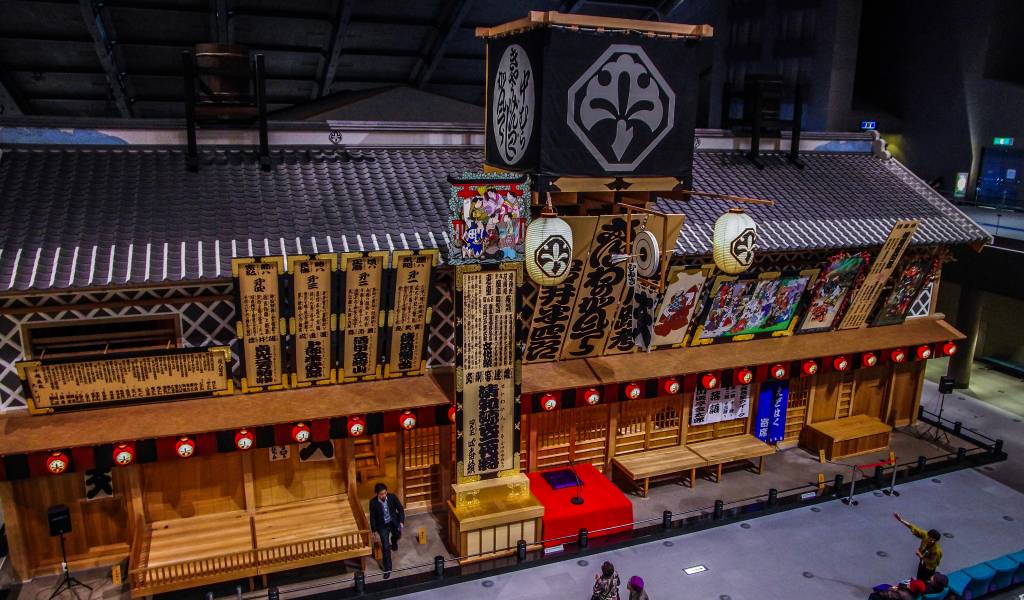 A Day in Edo Tokyo: Top 5 Edo Period Sightseeing Spots in the Capital

The Edo period pretty much defines what most of us think about when we imagine “traditional” Japan. Beginning with the ascension of Shogun Tokugawa Ieyasu in 1603 and ending with the 1868 Meiji Restoration, the Edo era was a 250-year period of isolation, prosperity and cultural flourishing—a time when the country took on some of its most essential characteristics.

Thanks to the bombs of the Pacific War and the ravages of time, Tokyo’s Edo past is a little more hidden than in more obviously historical destinations like Kyoto. Nonetheless, in the gaps between the high-rises and shopping malls, the Edo era lives on.

With our pick of Tokyo’s top five Edo sightseeing spots, spend a day discovering the city’s past life.

The Edo-Tokyo Museum is, without a doubt, the best place to begin your journey back in time. Located in Ryugoku, the museum’s imposing form (actually inspired by an Edo storehouse) dominates the skyline, meaning you won’t be getting lost on the way.

The museum traces Tokyo’s history from its humble beginnings, through the Edo period, the tumult of the 20th century and onto today. Inevitably, the Edo era gets the lion’s share of the attention, with interactive reconstructions, painstaking dioramas and an extensive collection of original artifacts. The museum is immersive and a lot of fun, making it the ideal way to gain a broad overview of the city’s Edo past.

And don’t worry, all information comes in English as well as Japanese, there are free guided tours and entry is pretty cheap.

Further reading: Edo Tokyo Museum: Time Travel to the Birth of a Metropolis

The Imperial Palace East Gardens are situated on the former site of Edo Castle, the one-time seat of power for the Tokugawa shogunate. Today, the gardens are the only part of the inner palace that is open to the public. The rest, as the residence of the Emperor and his family, is strictly off limits.

Little of the castle remains, though using your newly acquired knowledge from the Edo-Tokyo Museum, your powers of imagination should be able to fill in the gaps. On top of the hill, once the innermost part of the castle, you’ll find the remains of the main keep at the center of a large lawn, and strewn throughout the gardens there are segments of ruined wall and buildings to be discovered.

The castle remains are not really the main draw, however, it is the beautifully landscaped Japanese gardens that keep the visitors flooding in. Designed in the Edo-era, they give a taste of how Edo Tokyo’s denizens liked to unwind. The wooded Ninomaru Grove area, designed to imitate a typical Japanese forest, comes particularly recommended.

Yanaka is a living, breathing district that has managed, against the odds, to stymie creeping regeneration and hold on to its old-world charms. While you’re unlikely to see many ox-drawn carts or samurai, the profusion of shrines, narrow alleys, traditional stores and the atmospheric cemetery would make their presence not incongruous.

Yanaka is still a largely residential district, yet its tourist information center is well equipped to help visitors out. Head there for some extra info on the area, or to get involved in one of the frequently organized workshops in things like Kabuki theater, calligraphy and other Edo pastimes. Alternatively, simply wander the streets and take it all in.

A look around Yanaka Cemetry is a must, however. It is Tokyo’s largest cemetery, and, as the burial place of the last shogun Tokugawa Yoshinobu, it could be described as the resting place of the Edo-era itself. The well-maintained paths that crisscross the cemetery make it a wonderful place to stroll, especially in the spring under the blooming cherry blossom trees.

Although founded in 1393 as the principal temple of Jodo Buddhism, Zojoji Temple later became a favorite of Tokugawa Ieyasu, who selected it as his family temple. The on-site mausoleum today holds the remains of six Tokugawa shoguns.

Nestled in the shadow of Tokyo Tower, Zojoji contrasts starkly against its modern backdrop to beautiful and endlessly photo-friendly effect. Sadly, most of the temple buildings are reconstructions from the 1970s, necessary following successive fire damage. Sangedatsumon, the imposing main gate, however, is original, dating all the way back to 1622. It is the oldest wooden structure in Tokyo and more than impressive.

At the small cemetery, also find row upon row of statues depicting Jizo, the protector of children, in memory of stillborn and miscarried babies.

Further reading: The Giant Tomb Next to the Tokyo Tower…Have You Noticed It?

Another spot where the contrast between Tokyo old and new is at its most breathtaking. The Hama-Rikyu Gardens border the glitzy Shiodome district, just inland from Tokyo Bay. The garden’s tidal ponds were once used for duck hunting by the upper brass of the Tokugawa clan, later developed by successive rulers to create what we see today.

Walking along the banks of the pond and through the grassy meadowland, it’s easy to see why it was a popular hangout for the Tokugawas, especially in autumn when the foliage is painted in arresting reds, yellows and golds.

Otemachi Ryogoku Shiba Shiodome Yanaka
Written by: Jack Heslehurst
Filed under: Sightseeing
Tags:
Sharing
Questions or comments about this article?
Start a thread on our community forum
Ask our local experts about Tokyo