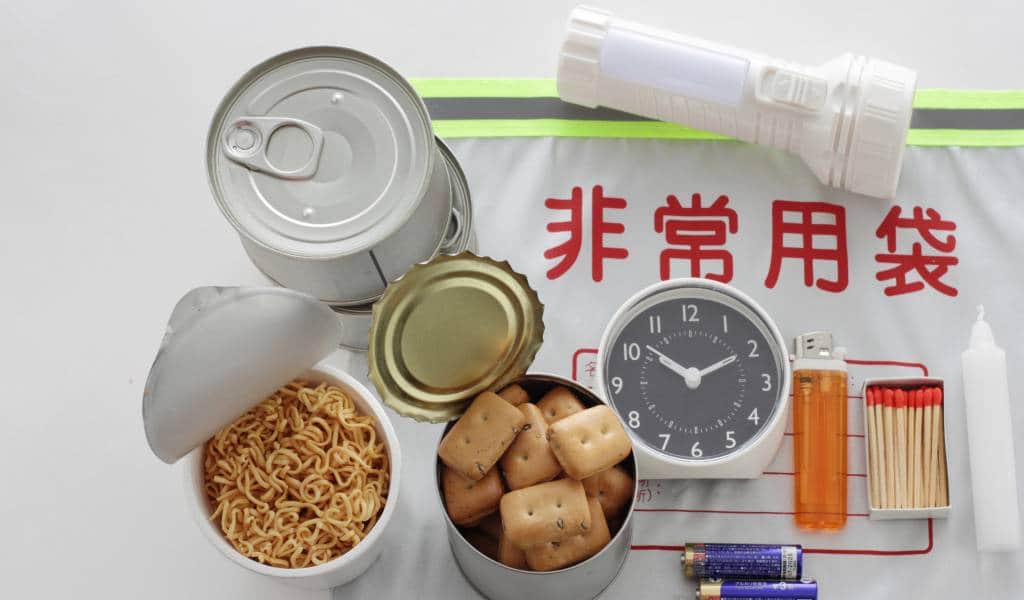 What to Do During an Earthquake in Japan

Whether you live in Tokyo or are just visiting, you’ve probably experienced a tremor or two in your time here. Japan sits at the intersection of several tectonic plates, along the Pacific Ring of Fire. This means that the country has abundant hot springs, volcanoes—and earthquakes.

While the majority of shakes are fairly small, more serious ones do occur. Looking at recent years, in 2011, Tohoku, in 2016, Kyushu and in 2018, Hokkaido were badly affected. Tokyo itself is thought to be “overdue” for a large earthquake (known as “the big one”), and the government has urged people to be prepared.

What follows is a basic overview of what to do if there is an earthquake in Tokyo or another part of Japan, with links to handy resources at the end.

Disaster preparedness: What to do before an earthquake

It’s a good idea to be ready for any kind of disaster, earthquakes included. At its simplest, being prepared involves the following:

How many supplies you should keep at home depends on how many people you live with, as well as how much storage space you have. It’s generally recommended that you prepare enough stuff to keep you comfortable and in good health for about a week.

While you can assemble a simple earthquake pack on your own, with items from home centers, supermarkets and lifestyle stores like Tokyu Hands, it’s often cheaper—and much easier—to buy a pre-packed earthquake kit.

Your earthquake kit, which is a grab-and-go bag you can take if you need to evacuate, should ideally contain at least the following:

This list is pretty basic; be sure to add any other personal effects you might need/want in an emergency situation. Just be careful it doesn’t get too heavy for you to actually carry!

Important: You’ll also need to assemble that stash of drinking water, dry food and other necessities at home—just having a small rucksack’s worth of supplies is generally not enough.

The Tokyo Metropolitan Government has put together a PDF booklet, in English, on exactly what you should put in your emergency grab bag and home supplies, and I highly recommend taking a look at it. The booklet also explains how to secure your home, and what else you need to do before, during and after an earthquake in Japan.

I bought the above disaster kit from Amazon, and keep it packed and ready to grab, just in case I need to evacuate. It’s not a bad idea to keep one at home, and one at work.

Important: 1–2 times a year, you’ll need to go through your emergency food and water supplies and check that they haven’t expired. If the best-before date is approaching, cycle them out and replace them with fresh items.

You’ve no doubt seen pictures of Japanese rooms with little rods and brackets attached to the furniture. Those are fitted to stabilize shelving, TVs and the like so that they don’t come crashing down in a big earthquake. Death by regrettable 70s lamp picked up at a sayonara sale? No, thank you.

You can buy stabilizing equipment for cheap at home centers or online. For a breakdown of what interior items need to be secured, using which accessories, see the Disaster Preparedness booklet again.

Remember: It’s not just about stabilizing furniture so that it doesn’t fall onto you; it’s about making sure it doesn’t move and block the route out of your apartment. A big consideration is the fridge: are you sure you could get past it if it were to take a tumble?

One of the major risks after an earthquake is fires (e.g. from gas cookers, stoves and electrical wiring), so you’ll want easy access to a fire extinguisher. If you live in an apartment, there should be one—or more—outside. Do you know where they are? Make a mental note.

If you live in a standalone house, or just want peace of mind, you can buy an extinguisher of your own. Fireman Joel can show you how to use a fire extinguisher pass-ably (five points if you caught that).

Know where to go

You can find out where to go in an earthquake or another type of disaster by doing a sweep of your local area. Schools and parks are usually designated evacuation facilities.

Your first step is to go on foot (leave your bicycle or car behind) to an evacuation site. Look for this sign, or a similar sign:

After gathering at the evacuation site, you may be asked to move to an actual evacuation center that is better equipped for stays. Here is a map of evacuation facilities in Tokyo.

If you have cats, dogs or other pets, you’ll need to do a bit of extra prep for an earthquake in Japan. Make sure you have:

If you need to evacuate to a shelter, ask about the rules for pets as soon as you arrive. Be aware that you may not be allowed to bring your pets inside with you, or, if they are allowed indoors, they may have to be left in a separate area. Make sure they are securely leashed. Investing in a small tent may not be a terrible idea.

If you have a mobile number in Japan, you can set up your phone to receive text alerts about disasters. This includes ear-splitting warnings for large earthquakes, sent by the Japan Meteorological Agency. Tourists can download the Safety Tips app to receive emergency alerts.

If you are lucky, the “jishin desu” (earthquake!) alert will arrive 20–30 seconds or more before the quake, giving you enough time to get out of bed or move away from that absurdly heavy bookcase you meant to secure. Sometimes, though, the alerts come just seconds before the earthquake, at the same time as it, or even after it, which is less than helpful. Sometimes there is no alert. And sometimes there is no earthquake.

As back-up, we recommend downloading the Yurekuru app (known as Prep on iOS) for your iPhone or Android device. You can choose a free or paid version, and set it to issue alerts for earthquakes of all sizes—even smaller ones—in whatever area you like. It provides a list of recently recorded quakes, so you can assess whether you did in fact just feel wobbling, or just had one too many a cup of sake.

How are earthquakes measured in Japan?

There are two ways to measure earthquakes. You can measure the magnitude (which remains constant) and the intensity (which varies depending on your distance from the epicenter, proximity to the fault, and ground conditions). The measure popularly know as the Richter scale (more commonly replaced by the modern Moment Magnitude Scale) is referred to in Japan simply as the “magnitude”, while the scale for measuring the intensity (how strong you feel it where you are) is the Shindo scale. The intensity of a quake is measured from 1 to 7, with things starting to get serious around 5 (so perhaps set your Yurekuru Call alerts to that).

What to do during an earthquake in Japan

If a big earthquake occurs, the first—and most important—thing to do is try to remain calm. Sure, it sounds clichéd, but it genuinely is crucial that you keep a level head. When it comes to practical actions to take, try to remember the following:

Read more about what to do during an earthquake in Japan.

If you live on the coast, or even near a river, make sure you can evacuate to a safe place where a tsunami or flooding won’t affect you. Look out/listen for emergency announcements, and don’t delay in getting away.

Similarly, if you live near a mountain, be aware that landslides can occur after an earthquake, and take the necessary precautions to ensure your safety.

What if my phone isn’t working after an earthquake?

While cellular service should be maintained, in a pinch, you can use the telephonic Disaster Emergency Message Dial service, which is 171. This allows you to leave a short voice message to your loved ones, who can then dial the same number to retrieve it. You assign the message to their number, and can add a PIN for security. Just make sure you all know what that PIN is in advance!

It’s not 100% clear whether you can use this service from all cell phones (it was originally made for fixed-line phones). We suggest calling your cellular provider if you want to make sure. Mobile phone networks do run text-based Disaster Message Boards too.

What if I’m at work when an earthquake hits?

Take steps to keep yourself and your coworkers, clients or students safe. Don’t rush out of the building on a solo mission; wait for instructions from your bosses. You may be asked to stay a while before trying to head home—this is simply to prevent chaos and crowding in the (possibly damaged) streets. Tokyo has millions of workers, after all!

It’s a scary thought, but if there is an earthquake in Japan while you’re on the train, just try to stabilize yourself, and wait for instructions from the conductor/driver. The train will stop running if a large quake occurs, but don’t try to jump out through a window or door—that could be dangerous. Just do your best to stay calm, breathe—and wait—and encourage your fellow passengers to do the same.

Pro tip: Familiarize yourself with Tokyo subway walking times (for above-ground walking only).

Something to keep in mind, if you’re on trains a lot, is that it’s a good idea to go to the bathroom before boarding, just in case. It’s a little unpleasant to think about, but if there’s a quake, it might be a while before you can get to a restroom!

Before you go: Worried about tropical cyclones in Japan? Read our quick guide to what to do during a typhoon.

We are in no way disaster experts. This article is intended as a basic guide only. Always follow the advice of government and emergency services during an earthquake in Japan.