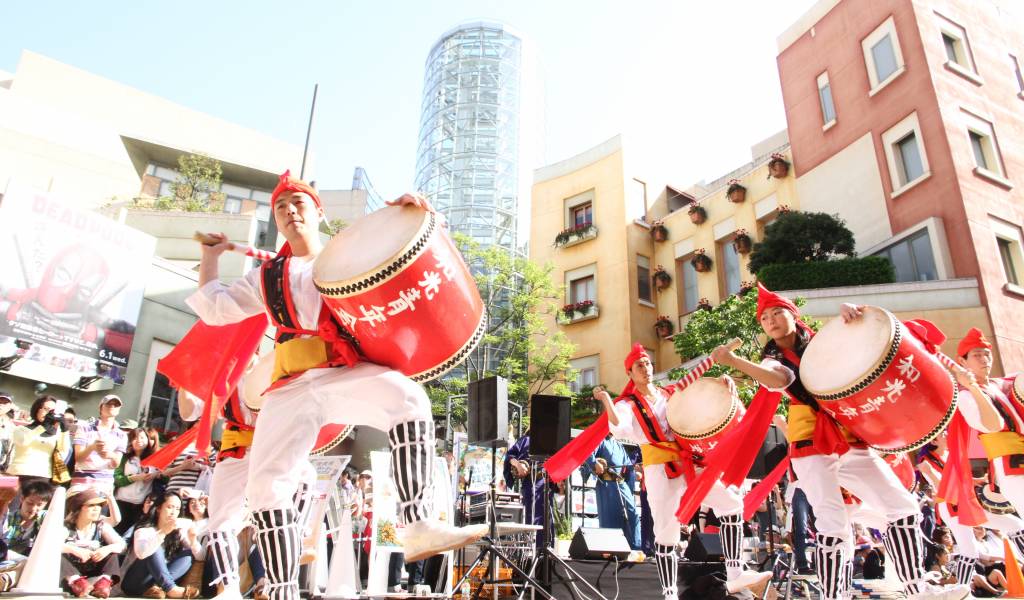 Whether you’re living in Tokyo or just visiting, make the most of the Golden Week holiday (April 29-30 and May 3-5) with these freebie events:

Meiji Shrine Spring Grand Festival (April 29-May 3): Meiji Shrine is dedicated to the deified spirits of Emperor Meiji and Empress Shoken. Every spring the shrine holds a 5-day event spanning Golden Week that features an impressive lineup of traditional performing arts presentations. Festivities include traditional Japanese music, theater and dance performances and a main Shinto ceremony on May 3rd.

Kurayami Festival (April 30-May 6): This festival is touted as one of the “three strangest festivals in Kanto”. Given that the competition includes a festival parading giant phalli and another in which participants have faces painted on their bellies, that’s really saying something. The festival takes place mainly in and around the Okunitama Shrine in Fuchu over a period of 6 days. The first day involves a trip to Shinagawa to collect seawater. The main days for activities appears to be on the middle Thursday and Friday.

Ryogoku Nigiwai Festival (April 29-30): Ryogoku is a neighborhood with a long history as the center of Japan’s national sport of sumo. It’s also the home to some major museums. This event was started to highlight the many points of interest in the area (nigiwai is a word that means prosperity or flourishing) so naturally the festival has multiple locations including the Kokugikan (national sumo stadium), the Edo Tokyo Museum and the Sumida Hokusai Museum. There will be lots of stalls serving chanko nabe (a staple food of sumo wrestlers—likely served by the wrestlers themselves!), stage events and that old favorite of Japanese community festivals—a stamp rally.

Akabane Baka Festival (April 29-30): Originally conceived in 1956 as an April Fool’s festival (baka is the Japanese word for fool or idiot), the festival now happens closer to May 1st and isn’t all monkey business. Most of the entertainment is fairly conventional, with troupes from all the popular summer dance forms taking part—from samba to yosakoi to awaodori. The fool part involves some participants dressing in comedic costumes.

34th Kon-Kon Kutsu Ichi (“Shoe Festival”) (April 29-30): In a gesture of customer appreciation, local shoemakers gather at Tamahime Inari Shrine every year and sell their goods (men’s shoes, women’s shoes, sneakers, sandals, bags, belts, leather accessories and material, etc.) for between 60 and 90 percent off their retail value. In addition to the market, visitors can participate in a ceremony giving thanks for old shoes and enter a raffle for various prizes. There’s also a parade featuring floats in the shape of men’s and women’s shoes.

Ome Grand Festival (May 2-3): This traditional festival features twelve giant wheeled floats known as “dashi”—each representing one of the neighborhoods of the city of Ome in far western Tokyo. Costumed mannequins ride the dashi, which are pushed and pulled through the streets to the accompaniment of traditional flutes and drums by the residents of the neighborhood they represent.

Haisai Festival of Okinawan Culture (May 3-7): The Haisai Festa is an annual event which celebrates the many aspects of Okinawan culture—from cuisine, music, dance, traditional arts and more. A major draw of course are the various food and drink stalls serving up local specialties (like soba and awamori). And stick around for the traditional eisa performances with plenty of energetic singing, chanting, dancing and drumming.

Spring Oktoberfest (April 28-May 7): The spring edition of Oktoberfest will be taking place in Odaiba over Japan’s Golden Week holiday. Entrance is free but food and drink is pay as you go. There will be a plethora of beer stalls, featuring both German and local Japanese brews, and food stands with the usual German fare, like pretzels, sausage, sauerkraut and more.

Odaiba Hawaii Festival (April 29-May 7): This year’s festival will feature Hawaiian music performances by national and international artists, a Polynesian show, Hula & Tahitian dance shows, and Hawaiian market where you can pick up goods and snack on tasty Hawaiian food.

Azalea Festival at Nezu Shrine (Apr 8- May 5): Nezu Shrine’s 300-year-old garden is at it again this spring with its colorful azalea bushes, of which there are 3000. In addition to that, there is a plant fair, an antique fair, and many festive stalls.

Machida Ramen Festival (Apr 27-30): This weekend is round five of this six-part foodie festival. Bowls of ramen are 850 yen a pop and you can taste various regional flavors hailing from all over the country. This year they have also added fried rice and dumplings, so you basically never need to leave.

For more ideas, read our guide on tips for avoiding the Golden Week crowds.