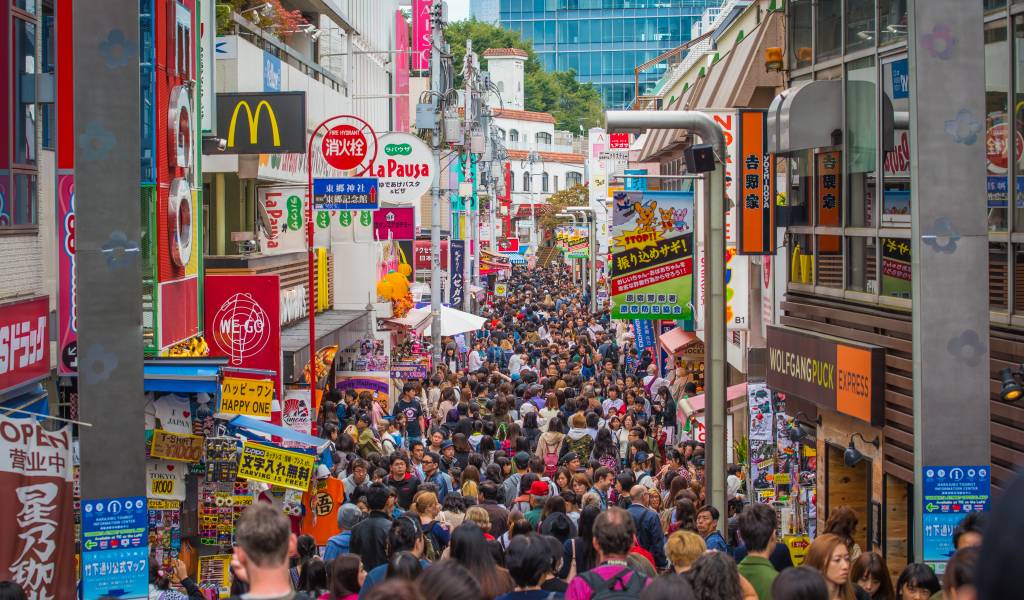 Fun, Free and Cheap Things to Do in Harajuku

When I first moved to Tokyo, I was living on ¥1,000 a day while renting half a room in the cheapest-of-cheap share houses. I didn’t care though—this is one of those special few cosmopolitan cities where you can experience the best of it for next to nothing, if you know where to look. With that in mind, I’ve compiled a list of low-cost and free things to do in Harajuku: pop culture hub and stomping ground of Tokyo’s most fashionable trendsetters.

Harajuku is the home of Japan’s most wildly fashionable (and sometimes just wild) brands, and many people dedicate their wardrobes to the unique and peculiar styles of the area’s subcultures. Roam through Yoyogi Park or wander across Harajuku Bridge and bring your best camera, because this is one of the few places in the world where your photo subjects will (usually) gladly pose without demanding spare change—you just need to ask nicely. Shashin totte mo ii desu ka? (Is it okay if I take a photo?) is a good phrase to memorize ahead of your day out.

You can expect to see people in dresses resembling something out of 18th-century France, “visual kei” punk-rock glam, and people cosplaying their favorite anime characters or dancing to 1950s American rock music and paying homage to the rockabilly lifestyle. Sundays are when Harajuku’s magic really happens. Bring an open mind and take no for an answer.

What better way to immerse yourself in Japan’s subcultures than by joining in the fun? There’s only one rule when dressing for Harajuku: be creative and open-minded! Mix and match your favorite styles, go bold, and don’t hold back.

Harajuku girls and boys have well-known styles like gothic Lolita, cute Lolita, punk-rock glam, French maid, schoolgirl, and cosplay, but that doesn’t mean you have to pick just one. Feel free to mix different styles and even cross cultures if you’re daring. Go all out—there’s so much you can do in terms of accessories, make-up, colors, layers, DIY customization, etc. Be ready to say “cheezu!”.

Get lost on Takeshita Dori

If you find yourself suffering from sensory overload, surrounded by toys, clothes and unidentifiable knick-knacks that make you want to gag from sheer cuteness, it’s a safe bet that you have wandered onto Takeshita Dori (“dori” meaning street in Japanese). This famous pedestrian-only street is known for its trendy boutiques, game centers and a super Daiso store, where you can buy anything you can dream of (as long as it’s worth 100 yen). Tuck in your arms and go with the flow—it will take you into the upmarket Omotesando area. Be sure to grab a Harajuku crepe or one of the other local sweet treats as you stroll.

Harajuku is famous for fashion, but it’s also got a rep for a sweet tooth as well, with plenty of trendy snacks and sweets on offer. With many adhering to the colourful trend that the area is known for, there are some more restrained options too (but who comes to Harajuku to be restrained?). The crepes are a classic – served with strawberries, cream and often entire slices of cheesecake wedged in there too. Head to Totti Candy Factory for whirls of rainbow candyfloss and Zaku Zaku for the crunchiest of cream puffs, filled with custard direct from Hokkaido. For a coffee break with a cute twist, head to Reissue, the home of 3D coffee creations. Whther it’s a scene from Jaws or your own cat recreated in milf foam and cocoa, you’ll be amazed at the skills on show. Find more unusual food suggestions here.

Escape to a spiritual oasis

Being in a dense and over-stimulating city like Tokyo can wear you down, but you can rejuvenate by making a visit to Meiji Shrine (Meiji Jingu). Enter Yoyogi Park through Aoyama 1-chome and stroll through the Avenue of Ginko Trees. This nature-lover’s walk is lovely anytime of the year, but especially so in the autumn, when the leaves change color and park visitors are surrounded by 360° of unbelievably vivid shades of red and gold. From there, you can drift northwards through the park until you’ve reached the shrine’s landmark entrance, the 40-foot tall Meiji Jingu Torii (gate).

What to do at a shrine in Japan:

Once you’re inside, you can cleanse your hands (and maybe mouth) at the purifying water fountain as a mark of respect to the shrine’s Shinto customs. Then, if you like, you can throw a coin into the offerings box—the amount is totally up to you—deeply bow twice, make a wish, clap your hands twice, and bow once more. Remember to take your hat off first if you’re wearing one. Take your time at the shrine, but bear in mind that it’s a place of great respect for Japanese people.

Just kidding. Please do not actually crash a traditional Shinto wedding ceremony if you witness one while visiting Meiji Jingu Shrine. There are on average 15 weddings a day, so the chances of spotting one are high. The procession is quite a sight to see: a parade of two priests, two shrine maidens, the couple, and a long trail of friends and family. Tourist or local, you’ll be blown away by the color and beauty of it. Just make sure to stay out of the way and appreciate it from afar.

Harajuku’s creativity extends far beyond the canvas, but it can be found on a few of those as well. There are a surprising amount of small galleries dotted around the area, including the not-to-be-missed Design Festa Gallery. The gallery hosts independent artists from Japan and abroad in a multitude of small exhibition spaces and is also host to a small bar and cafe. For some more traditional art, the Ota Memorial Museum of Art displays Japanese Ukiyo-e art, including exhibitions of big names including Katsushika Hokusai and Utagawa Hiroshika. There is no permanent exhibit but they create new exhibitions every few months, with a video explaining Ukiyo-e history in English on display every Sunday at 11am and 2pm and entry costs are dependent on the exhibition at the time. There are more than a dozen independent galleries dotted around Harajuku along with the crossover of art and technology available to explore at the Samsung Store and a fashionable take on art at the Espcace Louis Vuitton.

Shrine aside, Tokyo’s Yoyogi Park is free to use as you wish, which is perfect if you want to exercise but can’t afford an expensive gym membership. Run along the paths, salute the sun or sakura, leap, bound—and relax with a picnic afterwards. Of course, the last option is acceptable on its own, too. The park is just around the corner from Harajuku Station.

Just to the right of the landmark Omotesando Gyre building is the entrance to Cat Street. Unlike most streets in the area, Cat Street meanders for about 500 meters towards Shibuya Station. The reason for this is actually because Cat Street follows the path of the Shibuya River—which still runs in a concrete channel under the street. The river was channeled and covered as part of the massive “put concrete over everything” construction drive prior to the 1964 Olympics. The street is lined with quirky, but not cheap, fashion stores and eateries. The Roastery by Nozy Coffee serves delicious espresso with a cool, relaxed vibe. Trunk Hotel—off a side street just before the kids play park—is also a great place for a coffee/beer/cocktail break.

Take in art and bonus city views at the contemporary (and free) Espace Louis Vuitton Gallery on top of the Louis Vuitton store in Omotesando. But be warned—if you buy anything in-store, your cheapo rank will be downgraded to an F-!

As well as awesome views of the surrounding area, you can catch a glimpse of Mount Fuji from the roof garden at “Omohara” Plaza, also known by its full name as Tokyu Plaza Omotesando Harajuku. This is our recommended spot for watching the sunset.

It’s not just free, it might even add a few extra yen to your wallet. If you are in town for a while and are really serious about getting hard cash for your clothes, think about applying to be a vendor at the Yoyogi Flea Market. Vendor applications cost around 40USD, and although schedules tend to be irregular, during peak seasons the “Free Market” can provide space for up to 800 vendors. Read more about Tokyo’s flea markets and consider dropping by a few to browse for bargains too.

Summer is yukata time in Japan, and what better place to show off your threads than the streets of Harajuku? Enjoy the traditional Japanese experience of relaxing in a yukata with friends, with copious amounts of beer and street food, while watching the Jingu Gaien Fireworks Festival.

Dancers from all over Japan (and other countries) show off their best moves in this annual parade. The colorful and energetic mix of traditional and modern Japanese dance attracts over 800,000 locals and tourists every year. Originally from Kochi City, the Yosakoi festival was created in 1954 by their local Chamber of Commerce, apparently to combat the psychologically negative effects of the economic recession.

With over 90 teams and a total of around 5,000 dancers seemingly competing against each other to be the loudest and most spirited, you’ll definitely be shouting and clapping along with them at the Harajuku Omotesando Genki Matsuri Super Yosakoi event.

How to get to Harajuku and where to find more information

Access: Harajuku is easily accessible from JR Harajuku Station (on the JR Yamanote Line) or Meiji-jingumae Station on the Fukutoshin Line.

More information: We have an introductory video, podcasts and other resources to help you get your head around all the free things to do in Harajuku!

Harajuku
Written by: Tokyo Cheapo
Filed under: Things to do
Tags:
Sharing
Questions or comments about this article?
Start a thread on our community forum
Ask our local experts about Tokyo