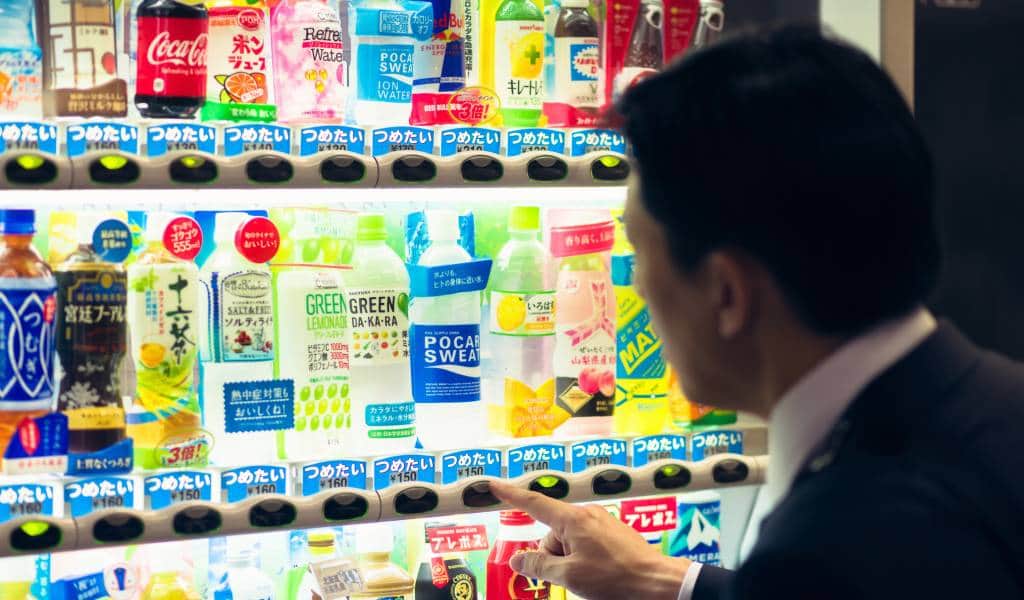 Out of Order: Visiting Tokyo's Most Unusual Vending Machines

There’s a vending machine on almost every corner in Japan. While they are usually filled with everyday necessities like water, juice, and coffee, fresh on the scene are next-generation Japanese vending machines selling unique items you wouldn’t typically see on the street.

Truffles, milk, natto, insects, SIM cards, bananas, honey, sandwiches, and various things in cans. You name it, there’s a vending machine for it. We’ve compiled a list of our personal Tokyo favorites, as well as an FAQ (answering your underwear-related questions), and a map at the bottom with precise coordinates so you know where to find them. Happy hunting!

Disclaimer: While we try to keep this article up to date, vending machines tend to disappear and reappear all over the place. So, proceed with caution.

Walking around Tokyo can make you peckish, so if you want to save some time and have some fun, stop by one of these vending machines for a quick snack.

Up first is a major trending topic on the internet, and the Namakuri Vending Machine might be worth the hype they’ve whipped up. Namakuri is a play on the words nama (fresh) and kurimu (cream), and I know what you’re thinking, Should mostly milk cost ¥780? Well, when it tastes this good, we give it a Cheapo pass. Plus, there are cake bits in there too.

You might have to stand in line for a while to try this one, but if the one in Shibuya 109 is sold out, then you can always catch a direct line to Ikebukuro and try the one in the Adores Sunshine game center. 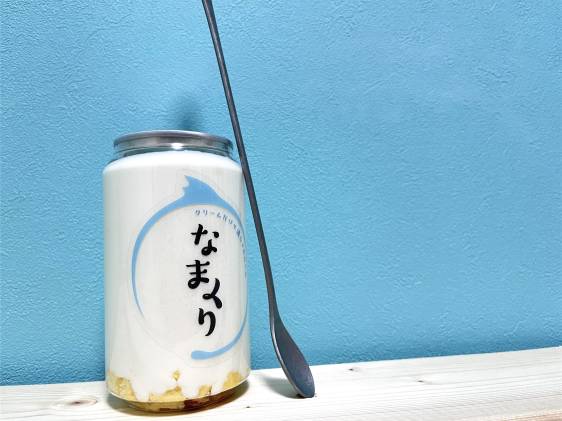 The uninitiated may squirm at the idea of eating creepy crawlies, but you may be surprised to know that they are high in protein, minerals, and Omega-3. Even though I wouldn’t call a handful of freeze-dried crickets a filling meal, they are perfect as a quick snack.

They also aren’t rare in Tokyo. There’s the MOGBUG vending machines in Takadanobaba and Akihabara — don’t be fooled by the cutesy pink exterior — as well as machines from Konchu Shoku with many places all around Tokyo, including Nakano Broadway, Kichijoji, and Ueno. 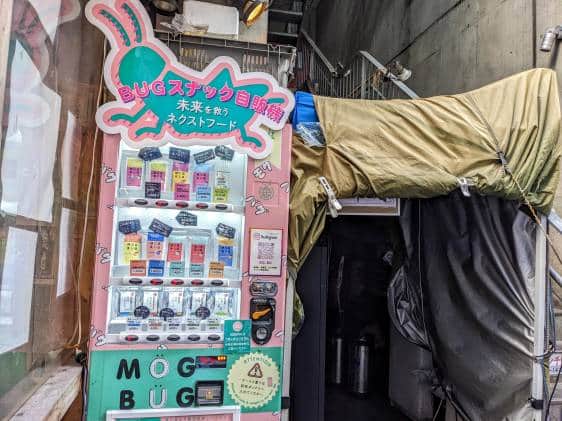 Cake in a can

Cakes and cans are not something you’d usually put together, but this slightly odd combination has caused quite a stir on social media. The patisserie Okashi Gaku is the most popular, selling creamy Hokkaido-born canned cakes in vending machines at Shibuya Mark City and in Oshiage near Tokyo Skytree (one is inside Tokyo Skytree Town). The price is high at ¥980 but that’s the sort of money you’d usually pay in a high-class bakery.

Okashi Gaku Cake in a Can Vending Machine 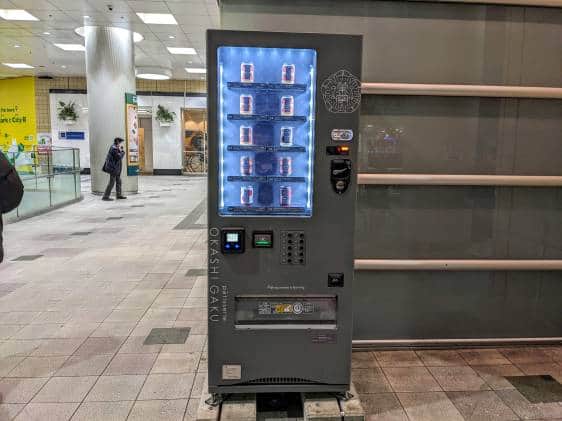 Ueno, Shibaura, and Haneda Airport Terminal 2
Varies
¥790~
Suggested Activity
Japan Rail Pass
The JR Pass is a 1 week pass that allows unlimited travel on Japan Rail lines throughout the country. This ticket is extraordinarily good value for long distance and inter-city travel. *Restrictions: Can only be purchased by temporary visitor visa holders not already in Japan. ...
Click here for details

Now, if you want something hot, Yokai Express is a fully automated restaurant that calls itself a cooking robot, not a vending machine. The technology arrived recently in Japan from Silicon Valley and so far there are only a few locations in Tokyo, including one in Ueno Station behind the Shinkansen ticket gates and one in Haneda Airport. Their menu is impressive and includes Ippudo Ramen and a wide range of regional flavors.

Frozen dumplings and other meals

Tokyo Station and around Tokyo
First train to last train
¥1,000

Frozen, ready-made meals aren’t groundbreaking, but put them inside a vending machine and you have yourself a convenient, easy-access meal that only needs to be heated up in a microwave at home or in your hotel. While frozen ramen is quite prevalent in Tokyo — check out Ultra Foods‘ locations — we want to highlight soup dumplings (xiaolongbao) by Jin Din Rou. They are a highly rated restaurant chain and have quite a number of vending machines around Tokyo including next to the Marunouchi Line in Tokyo Station. 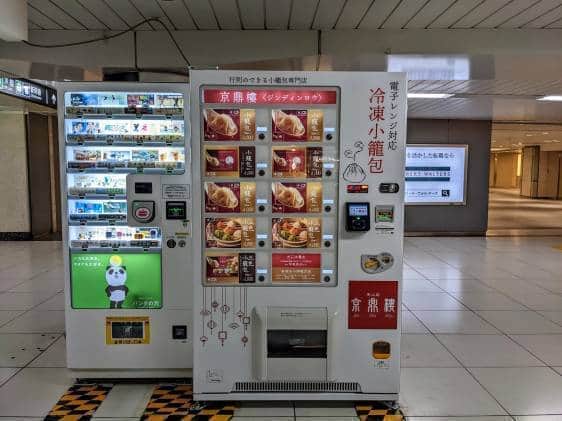 Be warned, these are not bottles you can pick up and drink. Dashi is a broth that you add during cooking. While you may not think there is much demand, they are aimed at the busy worker who doesn’t have time to go to the supermarket. There are plenty of locations around Tokyo. This is premium dashi, so you will pay a premium price of ¥700.

There’s nothing unusual about selling juice in a vending machine, but there is something special about selling freshly squeezed juice. The Feed ME Orange vending machine peels, squeezes, presses, and pours you a cup of pure orange juice in 40 seconds. They are currently expanding in Tokyo and have locations in Yurakucho, Saitama, Ikebukuro, Ariake Garden, and more. 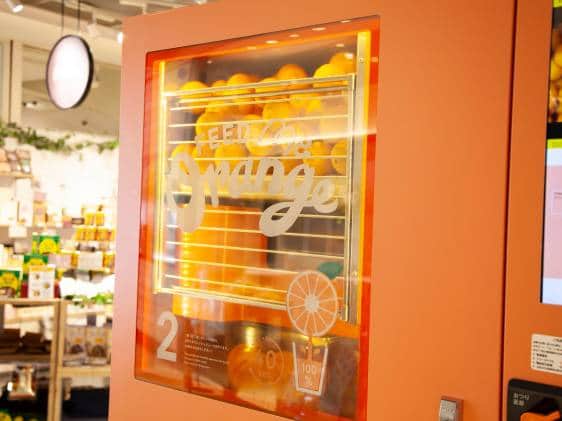 These are things you’d usually find in a department store and not in a vending machine.

There’s a King’s Treasure Box in almost every major transit hub in Tokyo, including Dōgenzaka in Shibuya and next to KFC in Akihabara. Despite being around for a while, these fun boxes aren’t out of style just yet. All you do is put in ¥1,000 and click a button, and then you’ll get a surprise present. For an in-depth look at these mysterious vending machines, read our article written by John Daub. 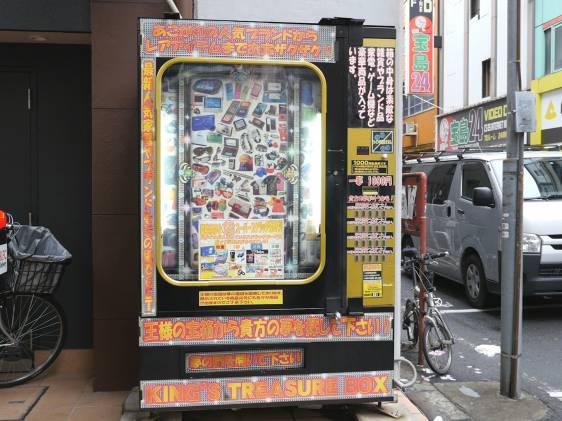 Hanko, otherwise known as personal seals or stamps, are used in place of a signature in many documents in Japan. Getting a hanko can be slightly time consuming but the Don Quijote stores make things a whole lot easier with a cheap and useful way to create your own. Their hanko vending machines are in most shops (usually in the dark, out-of-the-way corners, so make sure to ask) and start from around ¥800. As the machine says, they also make for great souvenirs. Full list of locations are on their official website.

Cards and other hobbies

If you are going to Akihabara, chances are that you want to check out the anime, manga, and other types of stores. While you’re there, you’re bound to see interesting vending machines filled with collectable cards, figurines, and other memorabilia.

This group of mismatched, beaten-up vending machines is affectionately named the “horror vending machine corner” by locals. No one knows where they came from, but many strange and unexplained objects appear inside these rundown boxes. Find toy beetles, bells, mystery boxes with stories on them, popcorn, canned yakitori, batteries, and toothpaste crammed into tight spaces.

We don’t recommend actually buying anything; this writer spent ¥490 on a story box about underwear but the vending machine door was mysteriously jammed and we couldn’t collect our prize. Some others had luck on the other machines, so you’ll have to roll the dice.

Tip: Grab a katsu sandwich from a more pleasant vending machine nearby to calm your nerves. 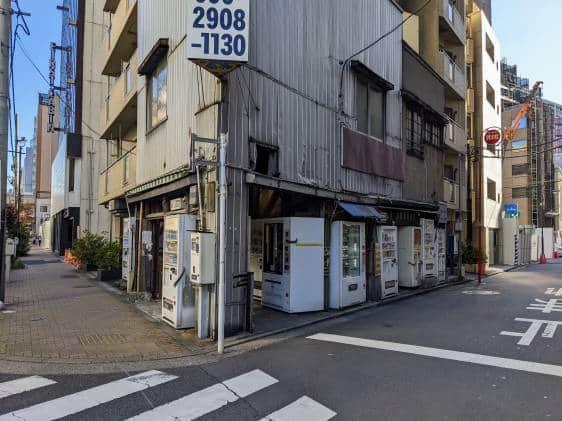 The retro aesthetic has gained quite a few fans in Japan, especially amongst young adults. People love to hit up old-fashioned cafes known as kissaten and to buy Showa-era antiques for the nostalgia hit. Vending machines are no different. People travel far and wide to hunt down retro vending machines along the highways and in hidden corners. The closest place in Tokyo to have a line of these machines is the Used Tire Mart Sagamihara Store‘s vending machine corner. They feature decade-old machines, from popcorn to instant ramen.

Tip: If you are renting a car and driving around Japan, you can find plenty of unique vending machines at roadside stations.

Now, we don’t mean anything saucy (more on that in our FAQ). These are vending machines that require ID, so you have to be over 20 years old to use them. Most of these products require a specific type of ID to purchase them, such as a Japanese driving license, My Number Card or Taspo Card (which will be retired in 2026). Unfortunately, tourists are unlikely to be able to use these methods.

All over Tokyo, usually outside tabaco stores
24 hours
Varies

In recent years, the number of cigarette and alcohol machines has waned. This could be due to the fuss of using a specific ID card (Taspo) compared with the ease of just popping into a convenience store, or it could predict a larger trend of people trying to quit the habit.

CBD has exploded in Japan, especially amongst young adults, so it isn’t really any surprise that there is a vending machine to service this new trend in the heart of Shibuya’s club district, Dōgenzaka. CBD is expensive and this machine is the priciest machine on the list — a disposable CBD vape will set you back ¥3,960 and significantly more for refills. It is only for over 20-year-olds and an ID is required. 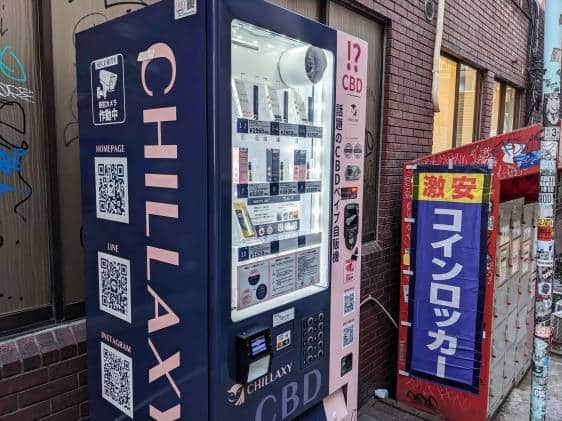 How do you use a vending machine?

It is very simple to use a Japanese vending machine. Some take only cash (but usually not one-yen coins) but more commonly you’ll be able to go touchless and use your IC card or phone to pay.

How many vending machines are in Japan?

According to December 2021 statistics from the Japan Vending System Manufacturer Association there are around 2,708,500 units in Japan. Overall, this number is actually a slight decline from the previous year, however food vending machines (such as the ones we’ve featured here) are on the rise.

Why are vending machines so popular in Japan?

There are a number of reasons, but the ease of buying items without the need to talk to anyone is high on the list.

Can vending machines be used in an emergency?

There are unique numbers written on every vending machine. You can give this number to the local emergency services if you don’t know your current location and they’ll be able to locate you.

What about the vending machines that sell underwear?

This is a bit of an urban myth amongst the Tokyo community. There are no such identifiable vending machines in Tokyo — believe me, we looked (for the purpose of this article, of course)! However, there are some slightly naughty machines selling naughty products on Tokyo’s outskirts and around Japan — looking at you, Kyushu. We aren’t sure if we condone this sort of activity, so we’ll leave you to research the details.

Please check below to see the locations of the vending machines featured.

Written by: Alexandra Ziminski
Filed under: Things to do
Tags:
Sharing
Questions or comments about this article?
Start a thread on our community forum
Ask our local experts about Tokyo