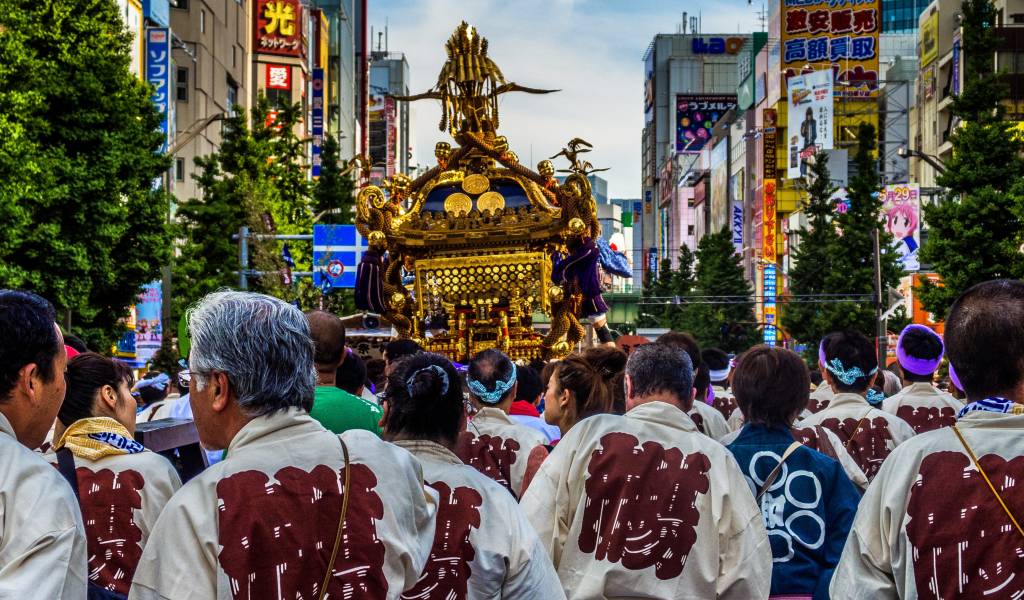 The shitamachi (the eastern parts of Tokyo where the non-samurai population flourished in Edo times) is a cheapo’s paradise for many reasons. Most relevant to this article is that it is home to several impressive matsuri, or folk festivals. Usually anchored on some jinja (Shinto shrines), the festivals involve processions with omikoshi, or divine palanquins. The idea is that the deity enshrined in the jinja is temporarily transferred into the omikoshi, and it makes the rounds to bless the people of the area.

The festivals usually start in spring and last through autumn. May is a particularly active month since there are up to three major events—four if we extend this period by a week to also include the one in Torigoe Jinja south of Asakusa, north of Asakusabashi and west of Kuramae.

Held only in odd years, one of old Tokyo’s greatest festivals is that of Kanda Myojin Shrine. The Kanda Matsuri is the first big event of May in 2019. You can either try for the parade on the first date, or for the omikoshi processions on the second.

The parade is impressive, involving horsemen and a float depicting the giant catfish Namazu, thought to be responsible for earthquakes. What’s priceless though are the omikoshi borne on the shoulders of drunken downtowners in Edo-style thongs and hanten coats passing through Akihabara and exchanging taunts with the maids!

This year, the second major May festival in Tokyo is Asakusa’s Sanja Matsuri, which is held on the third full weekend of May. On the first day, you’ll see a nice big parade of the city’s notables (geisha, various dance and music troupes, the heads of neighborhood associations, etc.). On the second day, the omikoshi of the neighborhood associations (aka “chonaikai”) go from Asakusa Jinja Shrine to Sensoji Temple, around Asakusa and back to Sensoji.

On the third day, it’s the three main omikoshi of Asakusa Jinja’s turn. These three are the guests of honor (the festival is held for them—or, to be more precise, for the deities they represent: the three founders of Sensoji Temple). And the crowds are beyond any description—conventional Asakusa wisdom is that on the two last days of the Sanja Matsuri, more than 1.5 million visitors come to the area! In other words, expect more color, shouting and alcohol than you’ve ever seen in Japan—or in Tokyo, anyway.

The next event is not very well known outside Asakusa, but this is why you have us, right? At 11am, in the open lot behind Sensoji, the Edo Firemen’s Culture Preservation Association holds its annual memorial for firemen who have fallen in the line of duty. This would be a very somber event if it weren’t that the participants are the spiritual descendants of the firemen of Edo (aka hikeshi).

Dressed in period clothing, they perform (quite impressive considering they are not professional gymnasts) acrobatics on very tall bamboo ladders. This, after doing a round of Sensoji laughing, yelling and waving their matoi standards to the delight of the crowd.

Last but not least is the Torigoe Matsuri. This is a big event if only for the main feature, the omikoshi weighing 4 tons (yes, it is the biggest in Tokyo). Like the Sanja Matsuri, this festival also involves smaller omikoshi from the neighborhood associations, but what everybody wants to see (and if possible, carry—carrying the omikoshi is, for the Edokko and their descendants, good for your luck/fortune reserves) is the big one. Again, crowds become so thick that sometimes the riot police need to be summoned!

Pro tip: Also in early May is the national Golden Week holiday. See our guide on tips for avoiding the crowds during Japan’s busiest travel week. And read more about Asakusa too!

While we do our best to ensure it’s correct, information is subject to change. Post first published in April, 2015. Last updated in February, 2019.

Akihabara Asakusa Jimbocho Kanda Ochanomizu
Written by: Grigoris Miliaresis
Filed under: Events | Things to do
Tags:
Sharing
Questions or comments about this article?
Start a thread on our community forum
Ask our local experts about Tokyo