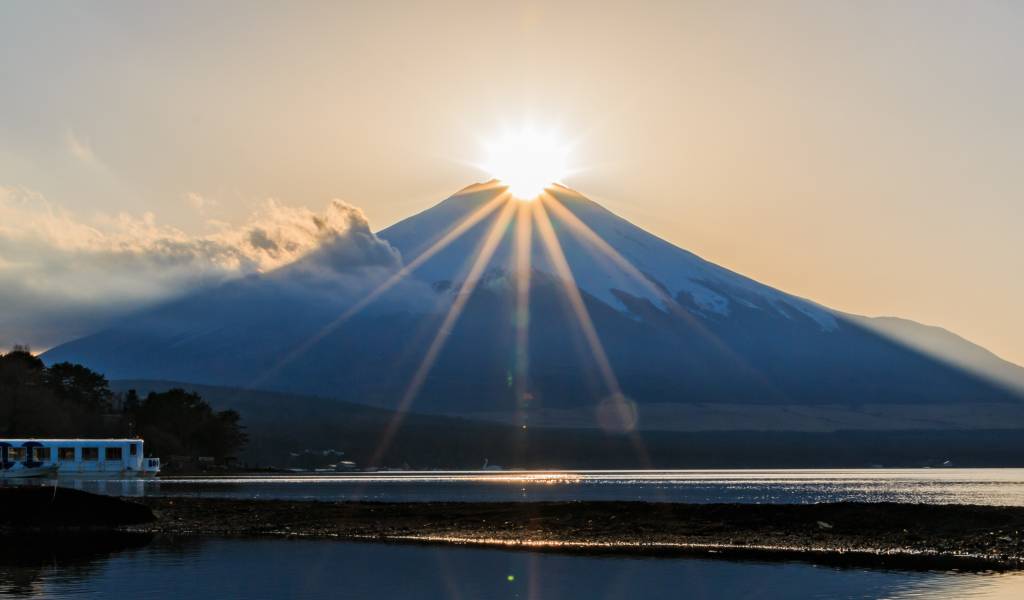 Throughout the year, a beautiful phenomenon called Diamond Fuji occurs when the rising or setting sun aligns with the peak of Mt. Fuji, causing the peak to shine bright like a diamond, hence its name.

If you want to witness and snap some pics of Diamond Fuji, the most practical option is to seek out the setting sun version. Catching the rising sun Diamond Fuji is also possible year round, but apart from a few days of the year, requires hanging out on roadsides or mountain peaks in Japan’s rugged Minami Alps. Luckily, both autumn and the especially clear skies of winter offer opportunities to see Diamond Fuji from the comfort of Tokyo.

Where to see Diamond Fuji in Tokyo: Observation decks

If you’re not lucky enough to live or work in a skyscraper, the best plan is to go to one of Tokyo’s many observatories to see Diamond Fuji in late January, early February and again in mid-November. Any high spot with a clear view to the south west from Tokyo is a possible candidate.

Whether you get a glimpse of the spectacle is highly dependent on the weather though, so you might just go home disappointed if you decide to visit on a cloudy day. Even if the weather is clear in Tokyo, there’s no guarantee it will be clear around the mountain.

Free spots include the two observatories of the Tokyo Metropolitan Government Building in Shinjuku and the Bunkyo Civic Center next to Korakuen.

The places where you can pay for a view are numerous, including Sunshine 60 (in East Ikebukuro), the super-tall Tokyo Skytree (in Oshiage), Tokyo Tower, Roppongi Hills’ Tokyo City View (closed for renovation until April 2021), Shibuya Scramble Square (the building not the crossing), and Sangenjaya’s Carrot Tower.

The sun will set around the top of Mt. Fuji when viewed from anywhere high in Tokyo from late January into February, but the best day varies depending on the location. Here are the best days and times for each location.

We don’t have the exact fall season time for Roppongi Hills City View, but it’s roughly midway between Tokyo Tower and Shibuya Sky, so November 2nd or 3rd would be the best days to try.

If you want to go on a trip…

If you’re prepared to travel outside of central Tokyo, there are many more opportunities to visit picturesque places to spot a Diamond Fuji throughout the year.

1. Shonan Coast and the Miura Peninsula

Both the Shonan Coast (the beaches at Zushi, Kamakura, Enoshima and Chigasaki) and the Miura Peninsula are much closer than Tokyo to the mountain. On a clear day, Mt. Fuji looms in the distance across the watery expanse of Sagami Bay.

The times when Diamond Fuji is visible from these areas is in mid-spring, and again in late summer/early autumn. Conditions at those times of year are not ideal for seeing objects in the far distance, so the best time to spot a Diamond Fuji may be after a typhoon.

Diamond Fuji is visible from Shonan briefly from April 4th to 6th and then again from the September 5th to 8th. Miura Peninsula is perpendicular to the plane on which the sun sets, so it’s visible for a bit longer—from April 7th to 15th and from August 27th to September 4th.

Mt. Takao isn’t actually that far from Tokyo, as it can be reached from Shinjuku via the Chuo Line in less than 50 minutes. Take a snowy hike up the mountain and be rewarded with a view of Diamond Fuji from the observatory at the top, or the nearby Momiji-dai. Just be sure to keep warm and comfortable in such chilly winter weather!

Mount Takao is one of the farthest places to the west in Tokyo where you can see a Diamond Fuji and the peak time is right around the winter solstice, so it is visible from near the summit of the mountain at sunset from December 16th until the 26th.

Lake Yamanaka is the largest of the Fuji Five Lakes, and, due to its size and proximity to Fuji, there are extended periods of time to catch a Diamond Fuji.

The (approximate) period of October 25th to November 25th also coincides with the turning leaves of autumn, for which the area is well known. Diamond Fuji returns to the lake less than two months later with a chance to snap a Diamond Fuji over the snow-covered peak of the mountain between January 18th and February 20th.

Highway buses can take you from Shinjuku or Tokyo Station to Lake Yamanaka in more or less two hours, for about ¥2,000 one way. The best viewing places in this area vary according to the date, but some examples of specific spots around the area are Hirano Village, the Hirano Panoramic Viewing Platform, and Nagaike Lakeside.

To maximize your trip, why not spend the night at one of the many resorts around the area? A small pension lodge called Isolana offers a great view of Diamond Fuji, and you can even view it while soaking in their open-air bath! With prices that start at ¥9,000 a night, inclusive of two meals, it’s cheaper than the large hotels.

An artificial lake in Shizuoka Prefecture, to the west of Mt. Fuji, Lake Tanuki is known for being a place to see the Double Diamond Fuji, because of its clean, clear waters that reflect the Diamond Fuji. Unlike the previously mentioned locations, Lake Tanuki is best for seeing a rising Diamond Fuji, which means you’ll need to get up early in the morning to see it.

Because the lake is so small, the period during which you can snap a Diamond Fuji is fleeting. The first is during spring from April 22nd to 25th and the second opportunity is in late summer from the August 18th to 21st. For both, you’ll need to be near the lake at around 6 am.

Hakone is a popular hot spring resort town to the south of Tokyo, and is a popular choice for day trips. Many Mt. Fuji–viewing tours are offered from there. If you have cash to spare, a good place to view Diamond Fuji is Hotel Green Plaza on the base of Mt. Fuji. It’s home to Sengokuhara, considered to be one of Hakone’s major hot springs. It also has open-air baths with a breathtaking view of Mt. Fuji.

The best spots to view a Diamond Fuji are the mountains to the north of Lake Ashi and to the south of Gotemba in mid-May to mid-June and again from mid-July to mid-August. You won’t be able to get Hakone’s centerpiece Lake Ashi into the photo though as it is too far south to line up, although you might be able to get a shot with the sun near the summit from the lake. Fujimi Cafe has a clear view of Diamond Fuji on July 17th.

If you replace the setting sun with the moon, you get Pearl Mt. Fuji. Unlike the sun, the moon has all night to hover in the right place, so there may be opportunities to see a Pearl Mt. Fuji at all times of night. However, if you’re looking for a full moon and being able to actually see Mt. Fuji at night, then you’ll need to be relatively close and the viewing opportunities are much less frequent.

Getting more information about Diamond Fuji

There are three sources of information that we’d recommend. The first is the excellent and very detailed calendar (link in Japanese) on the Fujisantotomoni website. We used this site to get all the date information in our article.

Another possible source is Exif data. If you go photo sharing sites like Flickr, they have the exact location and time as many photos are tagged with Exif data.

The last and most valuable source (especially if you are waiting for the rising Mt. Fuji and you don’t know the point where it will pop-up) is to ask locals in the area for the best spots when you arrive.

This post was originally published in January 2016 by Tiffany Lim. Last updated on January 25, 2021 by Greg Lane.