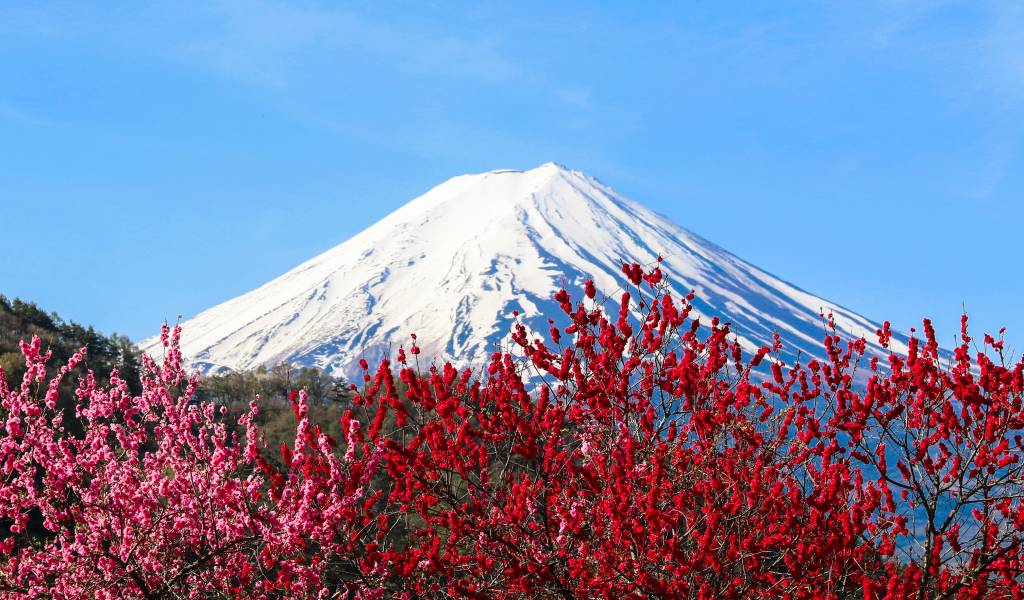 Plum Blossoms in Tokyo: Where to See Them

It’s true, cherry blossoms tend to overshadow Japan’s other stunning flowers. However, plum blossoms in Tokyo, which typically bloom in late February to signal the start of spring, are a delight in their own right and should not be overlooked. Plum blossoms are on display in and around Tokyo’s parks, gardens and shrines.

When to see plum blossoms in Tokyo

Before the Nara period (710–794 AD), hanami (flower viewing) referred to plum blossoms, not cherry blossoms. Plus the plum holds a special place in Japanese culture, symbolizing hope and vitality, and reassuring everyone that even if it’s still very cold, warmer weather will come. Despite the predominance of the more famous sakura season, plum blossoms haven’t been forgotten, at least if the plum blossom festivals (ume matsuri) around the country are any indication.

Plum trees start blooming when it’s still good and chilly: you can expect to see them from February in most years, some time before even the earliest cherry blossoms start to bloom. Although most plum blossom festivals start in early February, the best time to visit the places we list here is usually late February, as most of the flowers will hardly be blooming at the start of the month.

Pro tip: Keep your eyes peeled, as plum blossoms in Tokyo have been know to bloom early, like back in 2017. In some parks, such as Koishikawa Korakuen and Hanegi Park, the plum blossoms have been known to jump the gun and can already start blooming in late January—much earlier than the official dates for the festivals.

Where to see plum blossoms in Tokyo

Although there’s no shortage of plum trees in the metropolis, it’s when they are en masse that their beauty truly stands out. Here are seven good places (including several festivals) to see gorgeous plum blossoms in Tokyo.

This shrine is devoted to Sugawara no Michizane, a scholar who became deified as a tenjin (god of learning). Since the University of Tokyo is a short walk away, it’s unsurprising that many prospective students come here to pray for luck in their entrance exams.

Although the shrine is small, it’s known for its beautiful plum blossoms, and, annually, it commemorates the plum blossoms with a month-long festival filled with performances, a mikoshi (portable shrine) procession, and food stalls. The plum tree-lined staircase going down past the shrine and out into the streets is a wonderful sight.

The park’s location, Umegaoka (which means “plum blossom hill”) in Setagaya Ward, should already tip you off about what to expect here! Hanegi Park, while also small, has about 650 plum trees, making it a fitting location for Setagaya’s ume matsuri. During this festival, on weekends, vendors sell plum-themed food such as madeleines and jelly, and there are also some performances.

A quiet garden near Tokyo Dome, Koishikawa Korakuen is beautiful all year round. While it has dates marked as plum blossom season, it’s not so much a plum blossom festival in that there are not usually booths or special performances; it’s all about enjoying the fragrant blossoms in tranquility. The park only has a small number of plum trees, but you can enjoy the rest of the scenery too.

Another place with “Tenjin” in its name? Here’s a hint: Tenjin shrines tend to be associated with plum blossoms. Kameido Tenjin is known as the shitamachi (downtown) Tenjin shrine, and it has over 300 plum trees. Amidst those is a famous tree—”Goken no Ume”—which has both red and white blossoms. Its arched bridge is also a sight to behold.

This shrine is known for its red plum blossoms (koubai) and shidare ume, or pink weeping plum blossoms. For the duration of the festival, you can try amazake (a fermented rice drink, which is actually non-alcoholic) and ginger tea on Saturdays. On Sundays, they offer plum sweets, dried plums, and Kitano no Fukukoubai, a kind of umeshu (plum wine) that’s been fermented for 5–10 years.

On February 17th, visitors will be treated to amazake and tonjiru (miso soup with pork)—as long as there’s enough to last, of course. Plus, 200 visitors can take home a small plum spray.

Here’s where you can enjoy the plum blossoms with Tokyo Tower in the background. With only 70 trees, Shiba Park‘s so-called plum forest may be modest compared to the other places listed here, but it’s nonetheless spectacular. The trees, which used to be called the “Silver World” in the Edo period, were transported here from present-day Shinjuku in the Meiji Era.

Odawara is in Kanagawa Prefecture, but is only an hour and a half away by train from Tokyo. The plum blossom festival mainly takes place at and around Soga Bessho Bairin, a grove of about 35,000(!) plum trees that offers a clear view of Mt. Fuji. There are different kinds of plum blossoms here—red, white, pink, weeping; you name it!

Make sure to check out the festivities as well—there’s a yabusame (horseback archery) demonstration, lion dances, a calligraphy performance, concerts and more. Before going, check the event schedule (in Japanese).

Plum blossoms vs. cherry blossoms: How to tell the difference

While we do our best to ensure it’s correct, information is subject to change. Dates should be treated as approximate, as nature does her own thing. This post is updated annually. Last updated by Mareike Dornhege in February, 2020.

Kameido Odawara Setagaya Yushima
Written by: Tiffany
Filed under: Events | Outdoors | Things to do
Tags:
Sharing
Questions or comments about this article?
Start a thread on our community forum
Ask our local experts about Tokyo