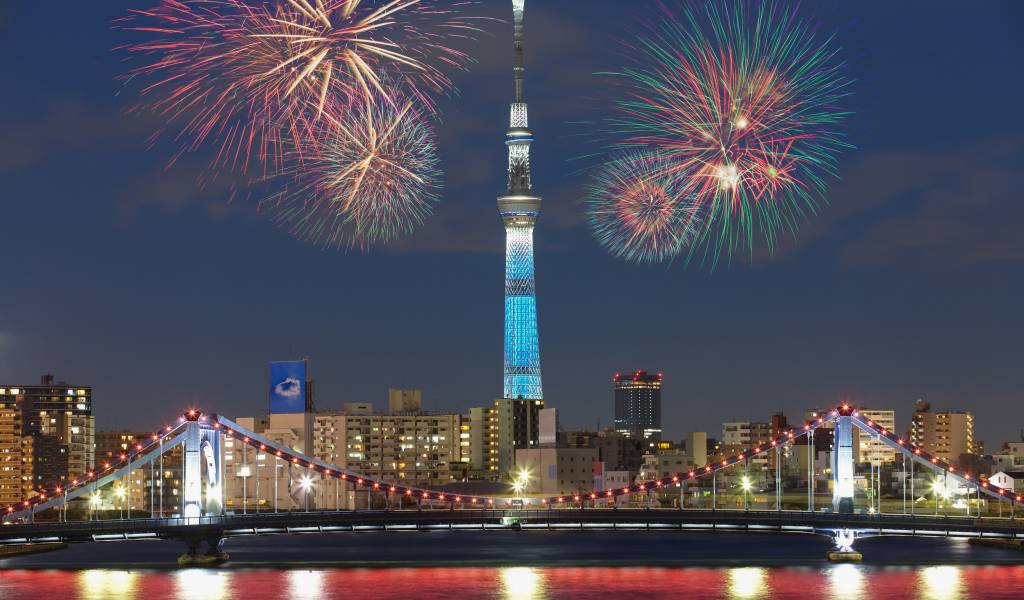 For Tokyoites, the Sumidagawa Fireworks Festival is the summer fireworks festival to see. And it’s as crazy as can be.

Believed to have first exploded onto the scene in 1733, this event has a long history of intense competition, with pyrotechnic companies still today trying to outdo one another. The festival always falls on the fourth Saturday of the seventh month—making it July 27th in 2019.

To say it’s a popular event would be an understatement. Crowds number in the region of one million, with nearby hotels and river boats driving a steep trade in prime viewing locations. If you don’t want to splash out on one of those, and don’t have friends strategically positioned in apartments in Asakusa, you’ll want to keep reading.

Keen on checking out another fireworks display? Our Tokyo Fireworks Guide has you covered.

A handy cheat-sheet for the festival is the area map, below, provided by the event committee showing pedestrian areas, toilets, off-limits areas and the all-important lauch sites. The 2019 version hasn’t been released yet, so you’ll have to take last year’s as a guide for now.

The fireworks are sent up from two separate locations on the Sumida River, designated 1 and 2 by the small fireworks icon on the map below (look closely, the numerals are sandwiched between kanji). The first spot shoots them into the night sky from 7:00pm to 8:30pm, the second starting slightly later, from 7:30pm to 8:30pm.

Road traffic officially shuts down at 6pm, but for several hours before, the tarmac is prime real estate as crowds assemble against the barriers, waiting to claim a square meter to sit on as soon as the last car is through. The area within the red line is closed to traffic. The red zones along the riverbank are off-limits to spectators, but the green zones indicate parks and pedestrian walkways, and are therefore fair game.

Where to watch the Sumidagawa Fireworks show (without binoculars)

Okay, so what does that map actually mean? Do you just rock up at Asakusa Station at 6.50pm and stroll along the river until you find a nice little patch of grass? Not quite.

People take the Sumidagawa Fireworks Festival pretty seriously, and roll in to reserve space as early as the day beforehand. Anywhere you see a blue tarp is already taken—and if you arrive in the afternoon of the big day, you’ll find that most of the key ground is gone.

Venue 1 is just upwards of Kototoibashi Bridge, while Venue 2 is between Komagatabashi Bridge and Umayabashi Bridge. The best viewpoint is said to be Sumida Park, but since everyone has that idea, you might want to try somewhere with a little more breathing room, like Shiori Park or the north part of Oyokogawa Water Park. Aim to get to one of those two spots by 5pm if possible, and chill till the show gets started.

You can also watch the Sumida River Fireworks show from Tokyo Skytree, but you’ll need to reserve tickets in advance. The same goes for getting your butt on a river boat (yakatabune or “pleasure boat”)—reservations for these range from ¥15,000 to ¥40,000 and are for groups. Most tickets include food and drinks, though for that price, you’d jolly well hope so.

And since we’re talking about less-than-cheapo options, here’s a guide to booking accommodation in Asakusa, in case you decide you want to go that route. Some people also make reservations at restaurants in the area well ahead of time—apparently a year is not considered excessive.

What to bring: Umeshu or umbrella?

Let’s say you’ve opted to do this fireworks thing on the cheap, and have outplayed the sieges, squatters and land racketeers (this is obviously a California gold rush meets Captain Blackbeard scenario in my head). Where food and drink is concerned, the DIY rule-of-thumb persists: “Anything a stall/restaurant can do, you can do more inexpensively. And if not, 7-Eleven can.” Bring your own cooler box stocked with iced water and beer, as well as some easy eats and wet wipes. Also bring a mat to sit on. Oh, and a fan, sweat towel and whatever else you need to beat the summer heat.

When it comes to clothing, you might want to don a yukata for the occasion. A lot of locals dress in these light summer kimono, adding to the festive atmosphere on the night. No idea where to get one for next to nothing? Our yukata buying guide has your back. Given the last couple of years, we suggest you also pack an umbrella and poncho—fingers crossed you won’t need them, but if you do, they’ll help you stick it out while others bail (or pay extortionate amounts to gleeful stall-holders).

Coping with the crowds

Expect to get close, real close, to half of Tokyo at the Sumidagawa Fireworks Festival. Also expect to lose your friends if they wander off in search of a bathroom or extra food—be especially aware of areas being barricaded closed at a certain point. When you arrive, make a mental note of the porta-potties that are nearest to your seating area, and designate a meeting point for later should your group get split up. Cell phones are handy, but trying to figure out which of the zillions of people someone is standing next to is near impossible.

Getting home after the Sumida River Fireworks Festival

When the show’s over, don’t rush back to Asakusa Station—instead, take a casual stroll through the festive streets to a station further afield. Tawaramachi on the Ginza Line is a decent distance and won’t be as crowded, plus it allows for a nice walk through the shitamachi-esque (old downtown) streets. Shin-Okachimachi is a little further, but has the Oedo and Tsukuba Express Lines, while the even-further Okachimachi has the JR Yamanote and Keihintohoku lines.

If you’re in no rush to get home, you could also consider going to karaoke. And while you’re floating around, consider some of these other fun things to do in Asakusa.

This post was published in July, 2017 and last updated in June, 2019. While we do our best to ensure it’s correct, information is subject to change.

Asakusa
Written by: Mine Serizawa
Filed under: Things to do
Tags:
Sharing
Questions or comments about this article?
Start a thread on our community forum
Ask our local experts about Tokyo