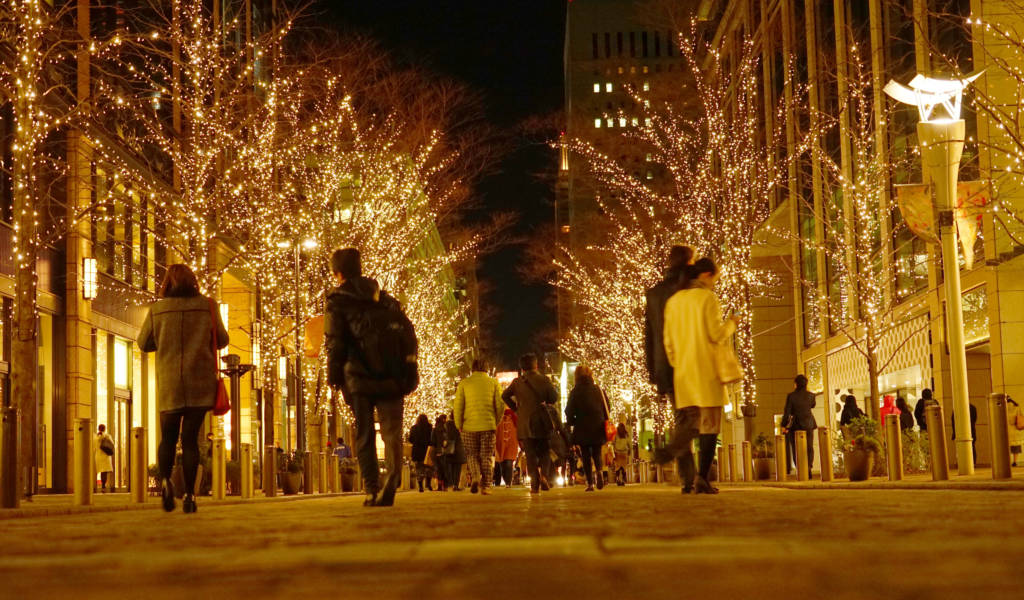 We’re not trying to squash the romance and wonder of the season, but Tokyo winter illuminations have become something of an arms race with the various districts trying to out-gun each other with more and more fantastically produced illuminations.

Until recently, it was all about the number of bulbs—LEDs make it possible to string up tens of thousands of twinkly lights without draining all the electricity from the power grid or electrocuting birds on a rainy day. Now, the light-up game has changed with projection mapping, digital choreography and interaction being used to draw in an audience.

Suggested Activity
Explore Tokyo Skytree and Sensoji Temple
Experience both Tokyo's rich history and futuristic architecture on this half-day tour. A guide will show you around Asakusa's legendary Sensoji Temple and the mega-tall Tokyo Skytree, taking you past other popular sightseeing spots along the way. Good value for money and great memories!
Click here for details

Anyway, screw the analysis, here’s our list of the best and twinkliest (in a very roughly best to least best order).

This event has proved to be such a hit with Christmas light-up junkies (many rank it as the best in a competitive field) that the event now goes until mid-February. This should hopefully ease the crowds slightly around the 24th of December.

This year’s show is an Aladdin-themed Arabian extravaganza with live performances throughout each evening. There will be two songs—Speechless and A whole New World—alternating by hour and with performances every 15 minutes.

Going all out with the Christmas lights, Roppongi Hills has a few different spots to visit in an evening. The West Walk and Roku-Roku Plaza will have special trees including an IRL version of the woman in the red dress emoji, but the big guns are saved for Keyakizaka—the street which runs down a gentle slope on the Azabu side of the Hills. There are about 700,000 LEDs glowing in the theme of “Snow Blue” and the pattern of Snow and Blue.

This is hands down one of the most popular displays in Tokyo. If you dare to go there on December 24th (don’t!) then you will be greeted by hundreds of security guards herding the tens of thousands of champagne-carrying couples into a squishy mass of humanity on the edge of a sea of twinkly blue. It starts in mid-November, so just go early.

This year the Starlight Garden will feature 190,000 lights and special balloons to create a space-like theme that is duly impressive.

The mature zelkova trees, the wide sidewalks, and the fancy shops make Omotesando one of the top illumination spots each winter. There aren’t really any gimmicks—you just go there and walk up and down the street strewn with 900,000 lights.

Calling the Marunouchi Illumination a “Christmas illumination” is a bit of a misnomer as it seems to be “on” each year for about the same time as it’s “off”. Nonetheless, this illumination is one of the classier ones—with cobblestone streets, 200 roadside trees, public sculptures and the reproduced facades of big banks, this is probably the closest you’ll get to a ye olde European-style Christmas light-up. They’re using “eco-illuminations,” lights that perform with 65% less power than standard. For an added Christmassy touch, head over to the Mikimoto Christmas tree on Chuo Dori.

OK, it says “autumn” but at least half of it is in winter so it still counts. This is the ‘anti-Christmas’ with up-lighting illuminating the brilliant hues of the changing autumn leaves. Note that this event finishes earlier than the others, wrapping up on December 12th in 2019. If you visit in spring, you can also catch some excellent cherry blossom themed displays too.

Something about the size and all the open space around Tokyo Dome makes it seem really, really cold in winter, but the illuminations make up for it. The theme this year is Japanese style and there is a beautiful exhibition of traditional Japanese umbrellas.

The Ebisu Garden’s Baccarat Eternal Lights champagne-gold illumination definitely goes heavy on the amps. The area in front of the main tower is typically flooded with fairy lights, illuminated bells, chandeliers and anything else they can find to make it extra bright and shiny. There will be a European-style Christmas market complete with a champagne bar until December 25th to peruse and the nearby beer hall of course.

The Baccarat display will finish on January 13th, but the general winter illumination will continue until February 24th.

The Skytree will be decked out in colorful finery for the festive season and will also be surrounded by a “Christmas market” selling things like German-made ornaments, beer, sausages and the like. There will be live music, a lottery and a general wintery feeling all around.

You can choose between a viewing ticket or a pass ticket which includes access to all of the rides. Those on a foreign passport can receive a discount by completting a short survey here.

And a couple more for good measure:

A cave made up of trees (much nicer than a real cave in our opinion), this illumination is one of the most magical thanks to the impressive colors. Originally held in Nakameguro and moved to Shibuya for the past couple of years, it draws huge crowds for good reason. The 600,000 LED lights are strung up on an 800 m route between Shibuya and Harajuku and you can access it from either station.

Head to the Odakyu area of Shinjuku Station for the barely-a-theme theme of ‘colour’ for its display of winter illuminations this year. There will be brightly lit statues, overhead creations and trees aplenty, all perfect to get you in the mood for festive shopping.

Need more holiday cheer in your life? Check out these Tokyo Christmas markets.

This post is updated every year and throughout the winter season. Last update: November 2019.
Akasaka Asakusa Azabu Juban Harajuku Omotesando Otemachi Roppongi Shibuya Shinjuku Shiodome
Written by: Selena Hoy
Filed under: Things to do
Tags:
Sharing
Questions or comments about this article?
Start a thread on our community forum
Ask our local experts about Tokyo