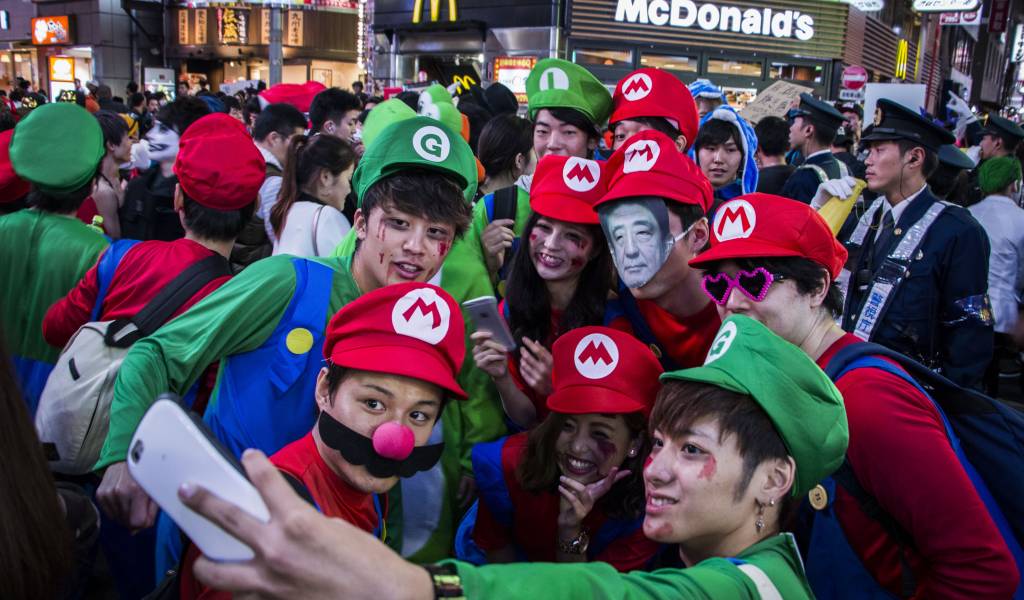 The Tokyo Cheapo Guide to Halloween 2019

October 3rd, 2019 | Tiffany
Sharing
It’ll soon be October, which means that Tokyo Halloween 2019 is upon us! If you’re less of a parade person and more interested in the nightlife options, read our guide to 2019 Halloween parties.

Halloween has become a massive hit in Tokyo in recent years—even more festive than Christmas! As early as September, Halloween decorations and goodies can be found in shops. What’s more, there are now a number of events around the city even before October 31st—at least one almost every weekend of the month, which means that there’s something for everyone. Some events are more adult-oriented, while others are family-friendly.

In general, though, while many shopping centers nowadays hold trick-or-treat events for kids, Halloween in Tokyo is largely a celebration for teens and young adults. More than experiencing spooks and thrills, it’s seen as a time to play dress-up and let loose in a bar or club—or on the streets, just like how Shibuya and Roppongi have become the sites for impromptu street parties. Do note, though, that in light of some drunken debauchery in the past few years, Shibuya Ward plans to crack down on street Halloween parties in 2019 by, for starters, banning public drinking from October 25–27 and October 31–November 1.

But we digress. Back to daytime Halloween fun: If you want to join the festivities, check out where to get some costumes here, and take your pick from these Tokyo Halloween 2019 events. Save for Tokyo Disney Resort’s festivities, it’s free to show up to these events as a spectator, although there will usually be fees if you want to join in costume.

Count on Tokyo Disney Resort to celebrate Halloween! Expect parades, themed food and merchandise, and special decorations at both parks.

While kids aged 11 and below are allowed to visit Disneyland and DisneySea in costume all year, Halloween is a special time when those aged 12 and up can also dress up. Unlike in previous years when guests could only dress up for around two weeks in all, this year’s Disney Halloween will allow guests to dress up for the entire period of September 9 to October 31.

Of course, this being Tokyo Disney Resort, visitors can only dress up as Disney characters, but that includes those from Pixar, Disney Channel, Star Wars, and Kingdom Hearts (except for Square-Enix characters). (Organized fun can be fun after all!) They have a very specific list of characters you can cosplay, so check here in advance. Note that Marvel characters are not included in the list.

To keep things family-friendly, there are certain restrictions on costumes—nothing too skimpy, no body paint, no weapons (whether real or fake), no excessively long props, and more. Double-check the rules here before attending.

Tickets: We recommend buying your Disney tickets online so you can bypass the line and go straight in.

Before Halloween became huge in Tokyo, the Kawasaki Halloween Parade was the event that came to mind when people mentioned Halloween. Now it’s got a lot of competition, but this event still never fails to draw huge crowds year after year. In fact, the event just got bigger, as it no longer just consists of a parade, but also a series of activities in the days leading up to Halloween. With activities ranging from face painting to partying, Kawasaki Halloween is an event that guests of all ages can enjoy.

If you still have the energy to party afterwards, there will be a club party from 4 pm to 10 pm, and an afterparty from 6 pm to 8 pm. The latter has a dystopian theme that’s to die for: a cruise around Kawasaki’s industrial landscape.

The day before, there will be a fashion show for kids at 11 am, 12:15 pm, 1:30 pm, 2:45 pm, and 4 pm. But if Halloween frightd are your thing, join the horror movie marathon from the night of the 26th until the wee hours of the 27th. The lineup includes horror classics such as The Texas Chainsaw Massacre and Hellraiser.

Bakeneko literally translates to “changed cat”, so we’re talking about cats that are no longer ordinary cats. With supernatural powers and unnatural features (e.g. tails that can split into two), they either transformed into ghosts, demons or monsters—or were not ordinary cats to begin with.

Blending Japanese folklore with Halloween, this parade takes place from 2 pm to 3 pm around the laid-back (but still lively) Kagurazaka area. From 10 am to 5 pm, there will be a variety of festivities before and after the parade: a dance performance, street performances, and more.

It costs ¥500 to join the parade, but children below junior high school age can still join for free. To join, all you need to do is to dress up as a cat or simply have a costume with cat motifs, even something as simple as cat ears. Be sure to arrive and register before 1:30 pm if you want to take part!

Where: Various locations around Futako-Tamagawa Station:

A family-oriented Halloween event, the Tamagawa Halloween Festival focuses on child-parent fun with craft workshops, a costume contest, a stamp rally, and of course, parades on both days.

This event features a movie-themed Halloween parade as its highlight. Additionally, for most of October, there will be concurrent promotions and activities, such as Halloween-themed special menus at participating restaurants and some fun activities for kids.

Cosplayers joke that Halloween is, ironically, a time to rest from cosplay and costuming. It’s mainly because, as far as cosplayers are concerned, cosplay usually refers to dressing up and acting as a specific character, and not, say, being a random monster.

In Ikebukuro, though, it’s a good time to be in cosplay for Halloween, as this event is more otaku (geek)-oriented than others. The heart of this Halloween festival is Sunshine City’s open-air space (as well as the nearby park), but during this weekend, you’ll see cosplayers all over East Ikebukuro’s main shopping area.

Regular cosplay entry costs ¥2,000 per day, and gets you luggage storage and changing-room access. (As a self-policing measure, cosplay events do not allow attendees to arrive or leave in cosplay. Participants must change in the changing room.) Also available is a premium pass (¥3,500) that gets you perks such as early entry and access to a special rest area.

If you’d rather be on the other side of the lens, register for a photography pass (¥2,000), which includes luggage storage and the ability to shoot to your heart’s content. Note that the the 2,000-yen tickets have an additional ¥300 added if bought on-site, while the premium pass is only available online.

There will also be plenty of other activities and attractions: a cosplay runway, stage events, gatherings for characters of similar series/themes, a parade, parties, and much more.

Cosplay may be a visible subculture, but the community is always extra-cautious because they don’t want to get a bad rep (especially from conservative folks who will be quick to point fingers at them if something goes wrong), so please make sure to observe the rules. When in doubt, ask!

This Halloween celebration that usually gets over a thousand participants each year is mainly for the kiddies. Pre-registration is required; you can start purchasing an entry badge at level B2 of Omotesando Hills from 11 am on October 14.

On the 27th, the parade will be from 1 pm until around 2:30. Only children aged 12 and under, as well as their guardians, can participate in the parade. As trick-or-treating is one of the activities at this parade, kids can get some treats afterwards, and some shops and restaurants around the area are known to give special discounts and services to costumed participants.

The Yamate area of Yokohama is known for its Western-style houses, remnants of the time when the area was an enclave for Westerners. On the 27th, from 10 am to 4 pm, there will be a stamp rally for costumed participants. Collect stamps from various locations in the Yamate area—including some houses and a park—and get prizes for being one of the fastest to complete them. Additionally, there will be a costume contest, food and merchandise, and a face-painting booth.

Another very kid-orientated event, this weekday parade is advertised as one that is by moms, for moms (sorry, dads). The organizers are looking for mother-and-child participants, with the kids supposed to be aged six and under.

There will be trick-or-treating, three different parades (including a parade for babies in strollers!), and a costume contest, but advanced registration of ¥850 to ¥2,200 (depending on the activities you want to join) is required. The event takes place from 10 am to 6 pm on both days, but the parades are just about an hour long.

If your idea of Halloween involves haunted houses and scream-park attractions, you might want to head to Osaka for Universal Studios Japan‘s Halloween Horror Nights. But you don’t have to go that far—our guide to Tokyo’s top haunted house attractions might be of help.

Open with Maps
Written by: Tiffany
Filed under: Things to do
Tags:
Sharing
Questions or comments about this article?
Start a thread on our community forum
Ask our local experts about Tokyo